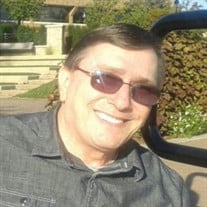 William R. Peterson, 72, of Plano IL, was born into Heaven on Tuesday, July 20, 2021 at Rush Copley Medical Center in Aurora IL. He was born May 7, 1949 in Niles IL the son of Thomas & Berna (Ahrends) Peterson. Bill spent his young career as a Mechanic, and later moved on to be a software programmer. He enjoyed movies, guitar, motorcycles and loved a good home cooked meal. Bill's greatest love of all was spending time with friends, family, and especially his grandchildren. He will be greatly missed by his loved ones. He is survived by three daughters, Samantha (Benjamin) Bastone of Plano IL, Christina Glover and Patricia (David) Pinchuk; one son, William M. Schumacher of Arizona; lovingly referred to as Buddy by his twelve grandchildren, Kyle, Jenessa, Joseph, Nathaniel, Brandi, Anabella, Daniel, Abigail, Jacob, Natalie, Josh and Luke; five great-grandchildren; one sister, Pamela Hart; one brother; Randy (Mary) Peterson of Kirkland IL; several cherished nieces and nephews; and his honorary family members Jason McNamara and Lauren Jones and their children. He was preceded in death by his parents; one daughter, Amy C Meyer; one son, Daniel T Peterson; one sister Patricia Peterson, and the mother of his children Sandra L Sedorchuk (Peterson). Memorial services will be held at 7 pm on Wednesday, July 28, 2021 at Turner-Eighner Funeral Home in Plano, IL. Graveside burial will be held at 11 am on Thursday, July 29, 2021 at Naperville Cemetery in Naperville IL. Visitation will be from 5:00 until the time of service at 7 p.m. on Wednesday, July 28, 2021 at Turner-Eighner Funeral Home in Plano, IL. For more information or to sign the online guest book go to EighnerFuneralHomes.com Turner-Eighner Funeral Home & Crematory 3952 Turner Avenue Plano, IL. 60545 (630) 552-3022

The family of William R. Peterson created this Life Tributes page to make it easy to share your memories.

Send flowers to the Peterson family.