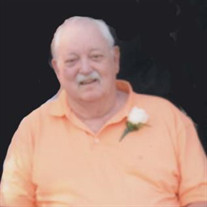 William E. “BILL” Brown, 86, of Sandwich, IL passed away Wednesday, December 16, 2015 at Willow Crest Nursing Pavilion in Sandwich. He was born August 12, 1929 in Millington, IL the son of Ole and Bessie (Brown) Brown. He married Dora F. Ratterree on April 19, 1952 in Plano, IL. He was a Korean War Veteran serving in the U.S. Army from December 1948 to January 1950. Bill was a member of the Plano United Methodist Church, Plano American Legion Post #395 where he was a past Commander, The Muskies Inc. Club and the Sandwich Moose Lodge #1016. He enjoyed watching the Cubs, Bears and was as avid fisherman. He is survived by his wife, Dora of Sandwich, IL; one daughter, Joni (Joe) Barry of Sandwich, IL; one son, Rex Brown of Plano, IL; three grandchildren, Ryan (Jennifer) Salemi, Nicholas (Stephanie Northey) Salemi and Lindsay (Justin) Van Deusen; two great grandchildren, Austin Salemi and Sophia Van Deusen; one sister, Shirley Duckett of Rockford, IL. He was preceded in death by his parents, one son, Rory Brown, two brothers, Robert and Richard Brown and one sister, Louise Dahl. Memorial services will be held at 1:00 p.m., Saturday, December 19, 2015 at Turner-Eighner Funeral Home in Somonauk, IL with Rev. Kent Svendsen officiating. Burial will be private. Visitation will be from 11:00 a.m., Saturday, December 19, 2015 in the funeral home until the time of service at 1:00 p.m. Memorials may be directed to the charity of one’s choice. For more information or to sign the online guest book, go to www.EighnerFuneralHomes.com Turner-Eighner Funeral Home 13160 W. RT34 Somonauk, IL 60552 (815) 498-2363

The family of William E Brown created this Life Tributes page to make it easy to share your memories.

Send flowers to the Brown family.