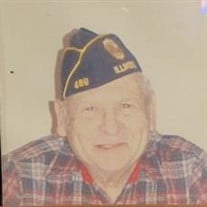 Wayne C. Morganegg, 99 years and 4 days, of Yorkville, IL. passed away Monday, October 25, 2021, at Seasons Hospice in Naperville, IL. He was born October 21, 1922, in Bristol, IL. to Chris and Relva (Black) Morganegg. He married Elsie Kunz on October 11, 1946, in Yorkville, IL. Wayne was in the United States Army Air Corp from 1940-1945. He was a member of the Barber Green Hunting and Fishing Club, Chapel on the Green, Lyons Historical Society, Friends of the Library, American Legion Post 489 for 76 years, Forty and Eight Veterans and County Commander American Legion. In 2019 he went on the Honor Flight with his son Denny. He is survived by his wife of 75 years, Elsie; three sons, Denny (Sue) Morganegg of St. Augustine, FL., James Morganegg and Robert Morganegg; seven grandchildren and several great grandchildren; one sister, Donna (Bert) Nease of Oswego, IL. and several nieces and nephews. He was preceded in death by his parents, five sisters and four brothers. The family would like to say a special thank you to the Bristol-Kendall EMS, Rush Copley Hospital, Seasons Hospice and Mark & Ruth Johnson and the many others that took part in Wayne’s care. Per Wayne’s request there will be no visitation or memorial service. Cremation rites were accorded. Arrangements were entrusted to Turner-Eighner Funeral Home and Crematory. Please omit flowers and gifts. Memorials may be directed to the American Legion Post 489 in Yorkville, IL. For more information or to sign the online guest book please go to www.EighnerFuneralHomes.com. Turner-Eighner Funeral Home & Crematory 3952 Turner Avenue Plano, IL. 60545 (630) 552-3022

The family of Wayne C. Morganegg created this Life Tributes page to make it easy to share your memories.

Send flowers to the Morganegg family.