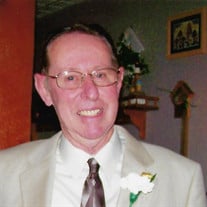 Wayne A. “Chris” Christopher, 82, of Somonauk, IL passed away Tuesday October 20, 2020 at his home in Somonauk. He was born October 20, 1938 in Ottawa, IL, the son of Mervin and Gertrude (Thompson) Christopher. He married the love of his life Barbara Fahrlander on April 12, 1958 in Somonauk, IL. He was a member of the Somonauk Lions Club, Somonauk Fire Department, Board member of Victor Township, and he worked 38 years for Tri-County Concrete. After retirement he spent his time farming with Tom Warren and John Frieders. He was an avid White Sox fan, he enjoyed fishing, duck hunting, and spending time with friends. Most of all he loved spending time with his family. He is survived by his wife, Barb; one daughter, Melinda Beutler of Wheaton, IL, one son, Scott (Lori) Christopher of Somonauk, IL; five grandchildren, Edward (Nicole) Beutler, Amanda (Nathan) Schwartz, Blake (Ashley) Christopher, Tyler (Julie) Christopher, and Colin (Raquel) Christopher; Ten great grandchildren; one brother, Everett (Pat) Christopher of Peru, IL, and several nieces and nephews. He was preceded in death by his parents, one son-in-law, Edward Beutler. Funeral Services will be held at 12:00 noon, Saturday, October 24, 2020 at Turner-Eighner Funeral Home in Somonauk, IL, with Pastor Derek Johnsen officiating. Burial will follow at St. John Catholic Cemetery in Somonauk, IL. Visitation will be from 9:00 a.m., Saturday, October 24, 2020 in the funeral home until the time of service at noon. In Lieu of flowers memorials may be directed to Somonauk Fire Department or the Charity of one’s choice. For more information or to sign the online guest book go to www.EighnerFuneralHomes.com Turner-Eighner Funeral Home 13160 Rt 34 W ~ P O Box 404 Somonauk, IL 60552 (815) 498-2363

The family of Wayne A. "Chris" Christopher created this Life Tributes page to make it easy to share your memories.

Send flowers to the Christopher family.