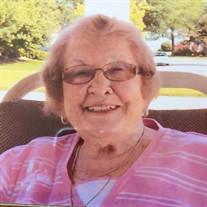 Vivian A. (Ingle) Feldott passed away peacefully at home Friday, January 29, 2021. She was the daughter of the late Ray A. Ingle and Vivian A. (Harris) Ingle. She was born on May 15, 1923 in Harvey IL, the oldest of three daughters. She was preceded in death by her husband, Henry (Hank) and two sons, Eric (Rick) and Todd. Vivian’s family moved to Aurora in 1938. She graduated from East Aurora High School and attended business school in Aurora after graduation. She worked for the Burlington railroad for a time and then was a receptionist for a dentist’s office in Aurora. She did volunteer work for the Red Cross during World War II. Volunteering in the three Aurora hospitals, St. Joseph, St. Charles and Copley. She volunteered for other projects in Aurora when the war broke out. She married Hank in 1947 and raised five children. She was Girl Scout leader for a time while raising her family. She did not work outside the home until her youngest son, Todd, was in school. She worked in the kitchen, for several years, at The Hope D. Wall school where Todd attended. She loved reading, playing cards, watching movies and Big Band music form the 40’s. She was a Woman of the Moose and belonged to the Friendly Center Club. She was happiest surrounded by her children, grandchildren, and great grandchildren. She enjoyed traveling with her two sisters after they all became widows. They traveled to Mexico, the Caribbean and Alaska and throughout the United States. She leaves behind her children, Deborah (Jeff) Pope, Christina (Michael) Foster, and Dirk (Lynn), grandchildren, Heidi Waser, Heather Pope, Jonathan Foster, Amber Siracusa, Matthew Feldott, great-grandchildren, Maddelyn, Caden, Nino, Brooklyn, Jade, Lucas and Ella and a number of nieces and nephews and great nieces and great nephews. Memorial Service will be held on Wednesday, June 23, 2021 at 12:00 noon at Turner-Eighner Funeral Home in Plano, IL, with Deacon Doug Wells officiating. Visitation will be held from 11:00 a.m. until time of service at 12:00 noon. Burial of Vivian, Henry, and Todd will follow at River Hills Memorial Park in Batavia, IL. With a Military Service for Henry. In lieu of flowers the family requests donations be made to the Open Door, 405 So. Wells St., Sandwich, IL 60548. For more information or to sign the online guest book please go to www.EighnerFuneralHomes.com Turner-Eighner Funeral Home & Crematory 3952 Turner Ave Plano, IL 60545 (630) 552-3022

Vivian A. (Ingle) Feldott passed away peacefully at home Friday, January 29, 2021. She was the daughter of the late Ray A. Ingle and Vivian A. (Harris) Ingle. She was born on May 15, 1923 in Harvey IL, the oldest of three daughters.... View Obituary & Service Information

The family of Vivian A. Feldott created this Life Tributes page to make it easy to share your memories.

Vivian A. (Ingle) Feldott passed away peacefully at home Friday,...

Send flowers to the Feldott family.