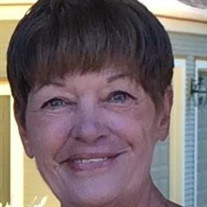 Virginia Kay Behrens, 76, of Sandwich, IL passed away Monday, April 12, 2021 at Valley West Hospital in Sandwich. She was born February 17, 1945 in Aurora, IL the daughter of Richard and Nola (Lee) Palmatier. She married Robert Behrens on July 9, 1993 in Ottawa, IL. In 1963 she was the Dekalb County Fair Queen. Virginia worked for over 30 years at Dr. Karl Csizer’s Eyecare Center in Sandwich. She was an avid golfer, reader, White Sox, Blackhawks, and loyal Detroit Lions fan. She enjoyed traveling and happy hour with her friends. Her greatest love of all was spending time with her family and grandchildren. She is survived by her daughter, Jocelyn (Steve) Retz of Sandwich, IL; her son, Marlon Collins of Sheridan, IL; two grandchildren, Kaylin and Keegan Herren of Sandwich, IL; her mother, Nola Palmatier of Sandwich, IL; her brother, Richard (Nancy) Palmatier of Sioux City, IA; her sister, Bonnie (Charles) Kerley of Somonauk, IL; her sister-in-law, Sheila Palmatier of Somonauk, IL; and several nieces, nephews, great-nieces, and great-nephews. She is preceded in death by her father, Richard Palmatier; her husband, Robert Behrens; and one brother, John Palmatier. Graveside service will be held at 10:00 a.m. on Saturday, April 17, 2021 at Oak Ridge Cemetery in Sandwich, IL. Visitation will be from 4:00 p.m. to 7:00 p.m. on Friday, April 16, 2021 at Turner-Eighner Funeral Home in Somonauk, IL, with a Funeral Service to follow at 7:00 p.m., with Reverend Theodore Engelsdorfer officiating . In Lieu of flowers memorials may be directed to the Open Door in Sandwich, IL. For more information or to sign the online guest book please go to www.EighnerFuneralHomes.com Turner-Eighner Funeral Home 13160 Rt. 34 W ~ P O Box 404 Somonauk, IL 60552 (815) 498-2363

The family of Virginia Kay Behrens created this Life Tributes page to make it easy to share your memories.

Send flowers to the Behrens family.