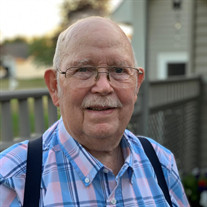 Virgil L. Johns, 87, of Sandwich, IL, passed away Tuesday, December 28, 2021, at Valley West Hospital in Sandwich, IL. He was born December 6, 1934 in Batesville, AR; the son of Clifton and Mamie (Estes) Johns. Virgil was a meat cutter for over 35 years, and retired from General Mills in 1996. He was also a veteran of the U.S. Army. He married Eunice Laura Bozik on June 23, 1956, in Aurora, IL, at Our Lady of Good Counsel Catholic Church. Virgil and Eunice spent a wonderful 70 years by each other’s side, being married for 65 and a half years. Those who know Virgil and Eunice were touched by the love they shared. There has never been a better example of two people in love, being each other’s best friends, lovers, and partners in life. He was an avid gardener and spent countless hours in their beautiful yard, planting flowers, taking care of the lawn, and tending to the hummingbirds. He was also a talented woodworker, and enjoyed doing handiwork around the house. He was a member of St. Paul’s Catholic Church, and was an usher for 20 years. Virgil was kind to every person he met, and was able to make friends wherever he went. His sense of humor, caring soul, and the love he had for The Lord and his family will live on forever in the memories of everyone he knew. He is survived by his wife Eunice, son Thomas (Sherrie) Johns, daughter Laura (Jeff) Millard, and grandchildren Jacob (Katie), Kristin, Mitchell (Jessie), and Nicholas (Kendra), and his one great granddaughter Laykin. He is also survived by sister Dottie Sue (Jerry) Peterman, sister-in-law LaVergne Cook, and brother-in-law Wayne (Sue) Bozik. He was preceded in death by his parents, his brothers Robert (Sheila) Johns-Prue and Cliff (Fern) Johns, and sister-in-law Bernadine Lawrence. There will be a small ceremony with close family on Friday, December 31, 2021, at Burkhart-Eighner Funeral Home in Sandwich. For more information or to sign the online guestbook go to www.EighnerFuneralHomes.com. Burkhart-Eighner Funeral Home & Crematory 606 E. Arnold Road Sandwich, IL 60548 (815) 786-2165

The family of Virgil L. Johns created this Life Tributes page to make it easy to share your memories.

Send flowers to the Johns family.