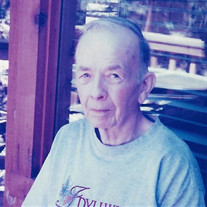 Thomas D. Egan, 88, of Somonauk, IL passed away Wednesday, October 16, 2019 at Willow Crest Nursing Pavilion in Sandwich. He was born December 28, 1930 in DeKalb, IL, the son of Dennis and Jessie (Butler) Egan. He married Maureen M. (Hurtt) Pennington on December 11, 1994 at Union Congregational Church in Somonauk, IL. Thomas was a member of Union Congregational Church in Somonauk. He served in US Army from January 7, 1954 to January 6, 1956. Thomas worked at Caterpillar in Aurora for over 30 years. He is survived by his wife, Maureen of Somonauk, IL; one stepson, Skip (Colleen) Pennington of Idyllwild, CA; one step-grandson, Cole (Maria) Pennington of Twenty-nine Palms, CA. He was preceded in death by his parents and one sister. Funeral Service will be held at 11:00 a.m. on Saturday, October 19, 2019 at Turner-Eighner Funeral Home in Somonauk with Rev. Theodore Engelsdorfer officiating. Burial will follow at Lincoln Memorial Park in Aurora. Visitation will be from 5:00 p.m. to 7:00 p.m. on Friday, October 18, 2019 at the funeral home in Somonauk. Memorials may be directed to Union Congregational Church in Somonauk. For more information to sign the online guest book, go to www.EighnerFuneralHomes.com Turner-Eighner Funeral Home 13160 Rt 34 W ~ PO Box 404 Somonauk, IL 60552 815-498-2363

The family of Thomas D. Egan created this Life Tributes page to make it easy to share your memories.

Send flowers to the Egan family.