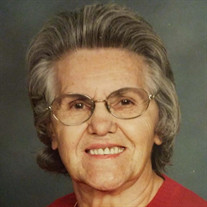 Theresa Tisberger of Plano, Il passed away peacefully Monday, November 29, 2021 at Prairie Crossing Assisted Living in Shabbona Il. She was born October 10, 1931 in Beschania, Yugoslavia the daughter of Jacob and Julianna (Wagner) Maier. Theresa was one of nine children, she and two of her brothers immigrated to the United States in 1951 from war torn Europe to St. Louis, Mo. She married John Tisberger on February 25, 1961 in Plano. They were both proud of becoming U.S. citizens on January 24, 1967. She was a homemaker with part time jobs through the years at Town and Country Restaurant, Treber’s Restaurant before retiring from the work force at the Plano Wash House. She loved spending time with her grandchildren, flower and vegetable gardening, cooking and baking. She is survived by her children Bill Tisberger of Normal, IL, Monica (Alan) Dotson of Sandwich, Il, Karl (Kim) Tisberger of Plano, Il as well as her grandchildren Beth (Sean) Hall and Stephanie Tisberger, Sara (Jason) Hill, Alec Tisberger, Alexis Tisberger, and Gina Maratea. Also four great grandchildren Quinn and Keaton Hall, Nathan and Addison Hill. Theresa was preceded in death by her husband John Tisberger in 1977 and her son Gerald Tisberger in 2019. Services will be private . Arrangements were entrusted to Turner Eigher Funeral Home in Plano, Il. For more information or to sign the online guest book go to www.EigherFuneralHomes.com Turner-Eighner Funeral Home & Crematory 3952 Turner Ave. Plano, IL 60545 630 552-3022

The family of Theresa Tisberger created this Life Tributes page to make it easy to share your memories.

Send flowers to the Tisberger family.