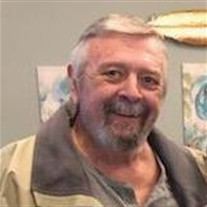 Terry R. Ovitt, 69, of Plano, formerly of Sheridan, IL, passed away Tuesday, June 18, 2019 at Edward’s Hospital in Naperville, with his loving family by his side. He was born November 12, 1949 in Aurora, IL, the son of Robert Elmer and Eileen Jane (Picton) Ovitt. He married Nancy A. Rezendes on January 16, 1971 in Las Vegas, NV. Terry was a proud Veteran of the US Air Force, serving during Vietnam. He was employed by Allsteel for many years and retired LDL Transfer in Sandwich in 2016. He is survived by his wife, Nancy of Plano, IL; two daughters, Kari (Fernando) Villanueva of Oswego, IL and Laura Ovitt of Chicago, IL; “Grandpa’s Favorite Grandson,” Talan; numerous nieces, nephews, cousins, and friends. He was preceded in death by his parents and his sister, Cheryl Klepser. A Funeral Service will be held at 10:00 a.m. on Saturday June 22, 2019 at Turner-Eighner Funeral Home in Plano, with Pastor Stevan Saunders officiating. Burial will follow at Lincoln Memorial Park in Aurora, IL, with Military Honors by the Plano American Legion. Visitation will be from 4:00 p.m. to 7:00 p.m. on Friday, June 21, 2019 at the funeral home in Plano. In lieu of flowers, memorials may be directed to Veterans Administration or American Cancer Society. For more information or to sign the online guest book, go to www.EighnerFuneralHomes.com Turner-Eighner Funeral Home 3952 Turner Ave. Plano, IL 60545 630-552-3022

The family of Terry R. Ovitt created this Life Tributes page to make it easy to share your memories.

Send flowers to the Ovitt family.