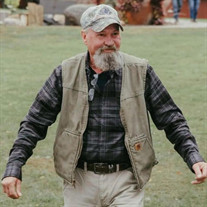 Terry A. “T-Bone” Christensen, 67, of Sheridan, Illinois passed away Friday, December 17, 2021 at Kishwaukee Hospital in DeKalb, IL surrounded by his family and friends by his side. He was born June 29, 1954 in Urbana, IL the son of Arnold and Carol Ann (O’Neill) Christensen. He was a member of the Carpenters Union, and worked as a self- employed carpenter and custom stair builder. He loved the great outdoors, and was an avid fisherman. Most of all he loved spending time with his family, many friends and extended family, especially at the Last Chance Saloon in Millington, IL. A Celebration of Life will be held at the Last Chance Saloon in Millington on December 26, 2021 from 10:00 a.m. until 1:00 p.m. Private family burial will be at a later date. Arrangements were entrusted to Turner-Eighner Funeral Home in Somonauk, IL. He is survived by one daughter Saede (Shawn) Lussier, and one son, Steven Witham of Ocala, FL., and two grandsons, Jackson and Ryker, two brothers, Mark (Danielle) Christensen, and Carl (Deb) Christensen, one aunt, Linda (Dave Fielding) Hagan, and several nieces and nephews. He was preceded in death by his parents, and one brother Steven. Arrangements were entrusted to Turner-Eighner Funeral Home in Somonauk, IL. For more information or to sign the online guest book go to www.EighnerFuneralHomes.com Turner-Eighner Funeral & Crematory 13160 W. RT 34 ~ Box 404 Somonauk, IL 60552 (815) 498-2363

The family of Terry A. "T-Bone" Christensen created this Life Tributes page to make it easy to share your memories.

Send flowers to the Christensen family.