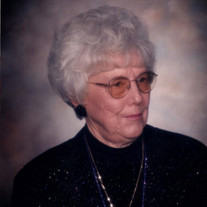 Shirley Ruth (Fritsch) Bauer, 97, of Earlville, passed away peacefully in her home on September 12, 2021. Services will be held on Saturday, September 18, at the Earlville United Presbyterian Church, with Pastor Del Keilman officiating. The visitation is from 9:00 a.m. to the time of the 11:00 a.m. funeral service at the church. Interment will be at the Earlville Precinct Cemetery. Funeral arrangements have been entrusted to Hanley-Turner-Eighner Funeral Home, Earlville. Shirley was born on March 23, 1924, on the Fritsch family homestead farm in Sandwich, Illinois, the daughter of George Augusta “Boy” Fritsch and Ruth Amelia (Otto) Fritsch. She attended grade school at the Sandy Bluff Country School, just a walk down the road from her home. Her family home and the grade school remain in the family’s possession. In 1941, she graduated from Sandwich High School. Following high school, Shirley attended Metropolitan Business College, Aurora, and upon completion entered into employment with Richard Wilcox Manufacturing Company, Aurora, as a secretary. Soon after graduation, Shirley met Paul Wilbur Bauer, son of Alphons Bauer and Josephine (Aubrey) Bauer, at Fairway Roller Rink, Sandwich. And soon after that meeting, they were married. They chose Valentine’s Day, February 14, 1947, at the Federated Church, Sandwich, for their marriage. Shirley and Paul purchased a farm where they proceeded to raise their four sons. She is survived by her sons Dr. Bruce Alan Bauer (Dr. Jane Matison) and Michael Dean Bauer (Linda Gilberston) all of Earlville. Surviving are also 21 grandchildren, 34 great grandchildren, and one great-great granddaughter. She was preceded in death by her sons Ray Paul Bauer (Deborah Butts), John Lee Bauer (Chris Donovan), and her husband Paul. Also preceding her in death were her brothers Wiley (Eva) Martin Fritsch, Russel (Carol) R. Fritsch, Lyle (Eleanor) George Fritsch, and sister Helen Virginia Fritsch (Jesse) Johnson. Also surviving Shirley is her loving caregiver, Nancy (Tim) Bidstrup. For many years, Nancy cared for Shirley as if she were her own family. Her dedication made it possible for Shirley to live out her last years in her own home, as was her wish. Shirley was a sports enthusiast. As a young woman, she played for the Earlville Victorians Softball Team. Later, she and her husband coached Little League, operated the concession stand, maintained the ball diamond, kept the scorebooks, and generally served as the Lion’s Club baseball managers maintaining baseball play in Earlville for many years. She enjoyed all professional sports but none more than the Chicago Bulls during the Michael Jordan years. She was a champion league bowler in Earlville and Sandwich into her nineties. In 1970, Shirley developed the lifelong skill and passion of golf enjoying it until she was ninety. She traveled to many places to play golf earning every prize imaginable. She also was able to follow her son, John, who held a PGA Card, in tournaments. John’s daughter, Beth, was a championship junior golfer, an NCAA Women’s Champion Golfer, and an LPGA rookie of the year. Shirley was able to follow Beth to many tournaments around the world. She was also an avid card player all of her life with Bridge, Euchre, and Cribbage being at the top of her list. She recreated many places, but her favorites were Hawaii and Squaw Lake, MN, where she could feel the wind and sun against her cheeks and the sand between her toes. Shirley retired as a rural mail carrier for the United States Post Office, however, she held many jobs throughout her life. She continuously worked on the farm assisting her husband, raising broiler chickens and popcorn to sell, operating an egg factory, and working seasonal work at the Ho-Ka Turkey Farms. She was employed at the Earlville Kor-Cheese Plant and Marathon Electric Plant prior to becoming a mail carrier. A storyteller and strong presence on every occasion, Shirley made conversation and friends with everyone around her. Her later years were spent researching her own family history and those of fellow families she encountered along her life’s journey. Ever curious, Shirley spent the last years of her life asking questions in which her great - granddaughter, Alexis, would inevitably just google for her. She remained inquisitive to the end. Though her triumphs in life were spectacular, like climbing to the top of Ayers Rock, Uluru, Australia and Diamond Head, Waikiki Beach, Oahu, Hawaii, they paled in comparison to what truly filled her heart with joy; time spent with family. She basked in the presence of her sons, but especially so in the midst of her grandchildren and great grandchildren. Those moments completed her. Pallbearers are her grandsons Derek, Chad, Bryan, Robert, Christopher, Shane, Lars, Adam Bauer and Edward, Andrew, and Noah Van Dorsten. Other grandsons are Marc and Jeff Page. Honorary Pallbearers are her granddaughters Heather Bauer Boston, Indya Bauer, Beth Bauer Grace, Demrhy Youngquist, Lori Van Dorsten, and Jennifer Bauer. Other granddaughters are Angela Butts Schiller and Jill Page. Memorials may be directed to the Earlville Community Historical Society. For more information or to sign the online guest book please go to www.EighnerFuneralHomes.com Hanley-Turner-Eighner Funeral Home 407 S. Ottawa St Earlville, IL 60518 (815) 246-6491

Shirley Ruth (Fritsch) Bauer, 97, of Earlville, passed away peacefully in her home on September 12, 2021. Services will be held on Saturday, September 18, at the Earlville United Presbyterian Church, with Pastor Del Keilman officiating.... View Obituary & Service Information

The family of Shirley Ruth Bauer created this Life Tributes page to make it easy to share your memories.

Send flowers to the Bauer family.