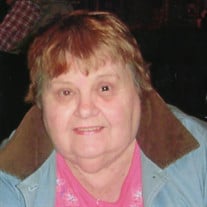 Sandra “Sandy” Smith, 83, of Somonauk passed away Sunday, May 10, 2020 at her home. She was born July 10, 1936 in Aurora, IL, the daughter of Margaret Wilson and Calvin Darby. She married John Smith on December 2, 1988 in Las Vegas, NV. Sandy was member of Millington United Methodist Church and the Women of the Moose. She was an avid NASCAR fan. Sandy was a self-taught artist, trying her hand at many crafts including crocheting and cross stitching. She is survived by her husband, John of Somonauk, IL; her children, Jerry Anderson of Sheridan, IL, Richard (Gail) Anderson of Millington, IL, and Diane (Victor “Torrey”) Zimmeran of Ottawa, IL; her step-children, Julie (Scott) Horsch and Shawn Smith both of Somonauk, IL; ten grandchildren; seven great grandchildren; her brother, Don (Marie) Wilson of Crown Point, IN; many nieces and nephews. She was preceded in death by her parents and her beloved yorkie, Max. Private Graveside Service will be held on Friday, May 15, 2020 at Millington-Newark Cemetery in Millington, IL. A celebration of Sandy's life will be held at a later date at the Sandwich Moose. In lieu of flowers, memorials may be directed to OSF Hospice in Ottawa, IL. For more information or to sign the online guest book, go to www.EighnerFuneralHomes.com Turner-Eighner Funeral Home 13160 Rt 34 W ~ PO Box 404 Somonauk, IL 60552 815-498-2363

The family of Sandra "Sandy" Smith created this Life Tributes page to make it easy to share your memories.

Sandra “Sandy” Smith, 83, of Somonauk passed away Sunday, May...

Send flowers to the Smith family.