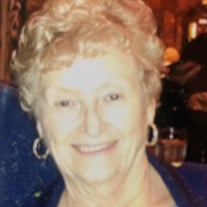 SANDRA “NANA” JOHNSON Sandra "Nana" Johnson was a caring wife, mother, grandmother, sister, and friend. Sandy passed away Sunday, July 18, 2021, after a courageous battle with rheumatoid arthritis. She was surrounded by loved ones. Sandy was born on September 18, 1943, in Austin, Minnesota, to Vernon and Clarice Bjorgo. At age 13, she was roller skating with friends when she stole the bucket hat off Robert “Bob” Johnson, also 13, and in turn stole his heart. A few days prior to that, Bob’s hair was shaved off for getting into a little trouble, which is why he was wearing the bucket hat. That trouble was a blessing in disguise. They became inseparable. Eight years later, they were married - a true love story for the next 56 years. While attending high school in Minnesota, Sandy worked as a telephone switchboard operator. She married Bob on December 5, 1964, at the age of 21. Together, they moved to Aurora, Illinois for better job opportunities, where she was hired with Illinois Bell, again as a switchboard operator. Sandy and Bob moved to Sandwich, IL where they lived and raised a family for 48 years in the same home. The benefits of living in a John Cougar-like small town included keeping a closer eye on her kids - like the time small town friends saw one of their cars being driven by a stranger. Turns out, their son Brian, age 16 at the time, took the liberty to loan his car to a friend - without permission! This resulted in a swift Norwegian (Sandy "Bjorgo") punishment for Brian. Again looking for a better job, Sandy was hired by the Dial Corporation where she diligently worked for almost thirty years as an assembly worker and a credit union loan officer. Co-workers looked up to her and respected Sandy for her work ethic. Sandy and Bob would often beg their kids for grandbabies. In quick succession, they were rewarded with seven grandkids (and a great grandbaby), and they became "Nana and Papa". Bob, a long-time car dealer, once took in two motorcycles on trade - red and blue - his and hers. They had thoughts of cruising the countryside. During the first lesson, Bob pushed Sandy out of the driveway where she popped a wheelie and crashed into the neighbor's yard…so much for the motorcycle dreams! However, they were able to tour the countryside. Sandy and Bob set a goal to visit all fifty states. After several years of traveling by car to visit monuments, meet people, and see national parks, they had one state left: Hawaii. Sandy hit the jackpot when she called in on a radio giveaway show, and she won a trip to anywhere in the United States, which gave them their fiftieth and final state. Yet, it was the simple things that made Nana the happiest. She loved spending time with family and friends, reading good books, watching birds, or playing games of cards. On a trip with girlfriends, she entered an all-male poker game and won (to her friends’ amazement). Needless to say, she had a good read on Bob and was the pulse of their house. While doing everyday things, her crooked smile, quick wit, and sense of strength were evident to all. Sandy was preceded in death by her father, mother, and younger brother, Dennis Bjorgo. She is survived by her husband Bob, their two children and their spouses; Brian (Jerilyn) Johnson of Plano, IL and Kimberly (Mike) Glisson of Edwardsville, IL, her sister, Janet Sheeley, several nieces and nephews, seven beloved grandchildren: Vance Schmidt, Mikayla Schmidt, Ryleigh Johnson, Michael Glisson, Jr., Bryce Glisson, Robert Glisson, Ella Grace Glisson, & one great-grandchild, Henry Schmidt. This tribute would not be complete without mentioning her caretaker, Joann Nichols. Joann and Sandy had a strong connection, and the family is beyond grateful for Joann's selflessness and dedication. “Nana” will be missed by all. A celebration of life will be held on Saturday, July 24 from 3:00-5:00 P.M. at Burkhart-Eighner Funeral Home in Sandwich, IL. In lieu of flowers, memorial donations may be made to one of the following: https://www.helpfightra.org Rheumatoid Arthritis Foundation, Help Fight RA 8815 Conroy Windermere Rd. Suite 309 Orlando, FL 32835 https://www.fvoas.org The Fox Valley Older Adult Services 1406 Suydam Road Sandwich, IL 60548

The family of Sandra "Nana" Johnson created this Life Tributes page to make it easy to share your memories.

Send flowers to the Johnson family.