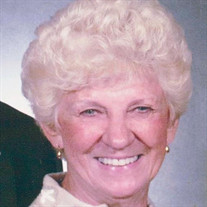 This is the story of Ruth Louise (Lockwood) Boatman, 90, of Plano, Illinois, who passed away on May 14, 2021. Her life was so much more than a one paragraph mention of her birth and death! She was an amazing woman; strong, self-denying, loving,... View Obituary & Service Information

The family of Ruth Louise Boatman created this Life Tributes page to make it easy to share your memories.

Send flowers to the Boatman family.