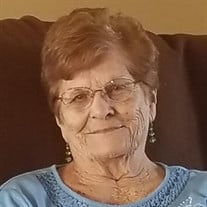 Roseann A. “Bunnie” Nelson, 93, of Harding, IL passed away Saturday, March 16, 2019 at Pleasant View Lutheran Home in Ottawa, IL. She was born March 7, 1926 in Aurora, IL, the daughter of John and Anna (Frieders) Diederich. She married Robert H. Nelson on January 6, 1945 in Aurora, IL. Bunnie was a devoted farm wife, homemaker, and seamstress. She and Robert enjoyed roller-skating. Most of all she loved spending time with her family and many friends. She is survived by her daughter, Ginger (John) Duffy of Serena, IL; her son, Gerald (Gina) Nelson of Earlville, IL; three grandchildren, Trisha Duffy, Greg (Trisha Munson) Nelson, and Susan (Josh) McNelis; five great grandchildren, Jenna, Riley, and Mason McNelis, Joe and Robby Nelson; one sister, Betty Helm of St. Charles, IL; several nieces and nephews. She was preceded in death by her parents, her husband, five sisters, and two brothers. Funeral Service will be held at 10:00 a.m. on Wednesday, March 20, 2019 at Turner-Eighner Funeral Home in Somonauk with Pastor Chris Schoon officiating. Burial will follow at Oak Ridge Cemetery in Sandwich. Visitation will be from 5:00 p.m. to 7:00 p.m. on Tuesday, March 19, 2019 at the funeral home in Somonauk. Memorials may be directed to the charity of your choice. For more information or to sign the online guest book, go to www.EighnerFuneralHomes.com Turner-Eighner Funeral Home 13160 Rt 34 W ~ PO Box 404 Somonauk, IL 60552 815-498-2363

The family of Roseann A. "Bunnie" Nelson created this Life Tributes page to make it easy to share your memories.

Send flowers to the Nelson family.