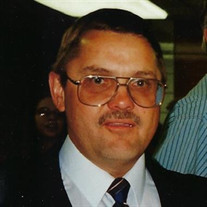 Ronald G. Corman, 70, of Sandwich, formerly of Decatur, passed away Sunday, December 2, 2018 at his home, surrounded by his loving family. He was born February 10, 1948 in Decatur, IL, the son of John and Kathleen (Coffman) Corman. He married Marsha “Jeanie” Estell on February 11, 1967 in Long Creek Methodist Church in Long Creek, IL. Ron grew up in the Long Creek Methodist Church where he served as the President of the MYF Group. Ron accepted Jesus Christ as his Lord and Savior in 1966 at a Billy Graham convention at the Lincoln Theater in Decatur, IL. He would ride his bicycle around the block with his firstborn granddaughter when she turned 2-years-old every Saturday and Sunday. Ron was a dedicated Caterpillar worker and supervisor for 44 years. He was an avid fan of the Chicago Bears, Cubs, and NASCAR, his favorite racer was Ryan Newman. Ron enjoyed touring on his Honda Aspencade Motorcycle with his wife and friends. He also enjoyed playing tennis, motocross racing, and golfing. In the great outdoors he loved gardening, mowing, and weeding his yard. After the work was done, he would enjoy relaxing in his pool. Most of all he loved spending time with his family. He is survived by his wife, Jeanie of Sandwich, IL; his children, Kamee of Sandwich, IL, Kurt (Tricia) of Tower Lakes, IL, and Kimberly of Anthem, AZ; six grandchildren, Kailynn (Jayson), Kennedy, Eric (Sarah), Kade, Ella, and Bobby; two great granddaughters, Taytum and Hallie. He was preceded in death by his parents, one son, Todd Douglas Corman in infancy, and one brother, Tom Corman. In accordance with Ron’s wishes, there will be no services. Cremation Rites were accorded. Memorials may be directed to Divine Hospice at 234 Garden St. in Yorkville, IL 60560. For more information or to sign the online guest book, go to www.EighnerFuneralHomes.com Burkhart-Eighner Funeral Home 606 E. Arnold Rd. Sandwich, IL 60548 815-786-2165

Ronald G. Corman, 70, of Sandwich, formerly of Decatur, passed away Sunday, December 2, 2018 at his home, surrounded by his loving family. He was born February 10, 1948 in Decatur, IL, the son of John and Kathleen (Coffman) Corman. He... View Obituary & Service Information

The family of Ronald G. Corman created this Life Tributes page to make it easy to share your memories.

Send flowers to the Corman family.