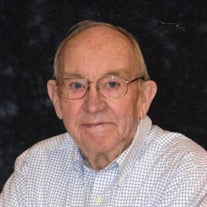 Ronald O. Boltz, 92, of Earlville, IL passed away Saturday, February 29, 2020 in Heritage Health in Mendota, IL. He was born August 1, 1927 in Earlville, IL the son of Oscar and Edna (Buckhardt) Boltz. He married Wilma Cromer on November 18, 1951 at her parent’s home in La Grange, IL. Ronald spent his life on the farm until his retirement in 1987. He was a lifelong member of Immanuel Lutheran Church where over the years he served as an usher, member of the church council, served on many committees and even was the custodian. Ronald was an avid volunteer in the community. He was a driver for the Earlville Ambulance Service, was a crossing guard for the Earlville schools, and was active with the Generation Exchange. He received the Golden Raider Award in 2010. He also was a member of two service clubs, the Mendota Elks Club, for over 50 years, and the Earlville Lions Club, for over 40 years. For the Lions Club he served as treasurer and club president, and was named The Lions of Illinois Foundation Fellow in 2002. Ronald was a proud veteran having served in the U.S. Army during the Korean War. He enjoyed spending time with his grandchildren and great grandchildren. He is survived by one daughter, Julianne Boltz of Centralia, IL; one son, John (Jenny) Boltz of Earlville, IL; three grandchildren, Kevin (Kelsi) Boltz of Sycamore, IL, Courtney Boltz of Erie, CO, and Kelsey (Andy) Stegman of Sheridan, IL; Four great grandchildren, Bryce and Landyn Boltz, Brooks and Drake Stegman; one sister, Fran Sellers of Compton, IL, and several nieces and nephews. He was preceded in death by his wife Wilma in 2017, one daughter, Lisa Kay Hanson in 1990, four sisters, Clarice Truckenbrod, Gertrude Spinner, Joyce Latimer, and Joanne Elsesser, and one brother Wayne Boltz. Funeral Service will be held at 10:30 a.m. on Wednesday, March 4, 2020 at Immanuel Lutheran Church in Earlville, IL with Pastor Denise Rode officiating. Burial will follow at Precinct Cemetery in Earlville. Visitation will be from 5:00 to 7:00 p.m., Tuesday, March 3, 2020 at Immanuel Lutheran Church in Earlville, IL. Memorials may be directed to Immanuel Lutheran Church. Arrangements were entrusted to Hanley-Turner-Eighner Funeral Home in Earlville. For more information or to sign the online guest book, go to www.EighnerFuneralHomes.com Hanley-Turner-Eighner Funeral Home 407 S. Ottawa St. Earlville, IL 60518 815-246-6491

The family of Ronald O. Boltz created this Life Tributes page to make it easy to share your memories.

Send flowers to the Boltz family.