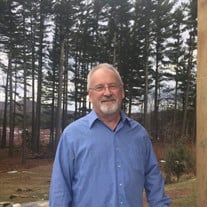 Ron Turner 12/16/1951 – 1/1/2021 Ron Allen Turner was born in Waukegan, Illinois on December 16th, 1951, the son of Naomi (Wortham) and Charles Turner. Ron spent his childhood playing on the shores of Lake Michigan, often camping out there for days at a time. Being close to water and nature has always been a major part of Ron’s life. In fifth grade, Ron’s family moved 60 miles west of Chicago to Plano, IL which is where he met Linda Orr. Years later, Linda and Ron, high school sweethearts, married on July 28th, 1973, while Ron was attending Worsham Mortuary school. In 1976 they welcomed their first child, a daughter, Andrea, and in 1978 they had their son Andrew. Ron was incredibly entrepreneurial. While most know him through Turner Funeral Homes, Inc., others know him for his speaking role at national conferences, involvement in tech startups, or property development. Ron’s reach was wide as he taught Psychology and Sociology at Worsham College and began a grief support group “Walking With Friends”. In 2006, Ron and Linda moved to Vermont where he applied his Master’s in Social Work in various forms. For the past nine years, Ron has dedicated himself to the mission of Champlain Community Services (CCS) in Colchester, VT as the School2Work Coordinator. He devoted his time to building partnerships with businesses in the community to provide work experiences for CCS clients. For many years he enjoyed training and competing in marathons and triathlons. He was a member of numerous social organizations, as he was incredibly passionate for people. He was gifted at short-story writing, public speaking, wood working, and other things too numerous to list. Few people had a life as full and memorable as Ron. Even though he was often requested for wise counsel, he was always the best listener in the room. Most of all, he loved his God, his wife, and his family. Ron is survived by his wife Linda, his daughter Andrea Leppert, (Revere, MA), his son-in-law Steve Leppert, (Underhill, VT), his son and daughter-in-law Drew and Michelle Turner, (Underhill, VT), four granddaughters: Katelynne and Kamryn Leppert and Lillian and Evelyn Turner, (all of Underhill); sisters Cindy (Wayne) Shumaker, (Elburn, IL), and Michelle (Jeff) D’Aleo, (LaGrangeville, NY), step-mother Bernita Turner, (The Villages, FL), step-siblings, Sharon, Lenita, Gary, Roxanne, and a plethora of nieces and nephews.

The family of Ron Allen Turner created this Life Tributes page to make it easy to share your memories.

Send flowers to the Turner family.