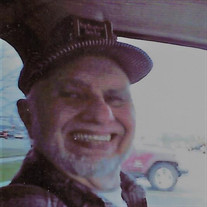 Robert C. Storm, “Choo Choo Bob”, 82, of Millington, IL passed away Saturday, December 14, 2019 at his home surrounded by his loving family. He was born in Chicago, IL on December 19, 1936 the son of Elmer and Roberta (Eischen) Storm. He married Mary Ellen Wulff February 14, 1969 in Chicago, IL. Bob was a mechanic for Local 701 retiring in 1999. He was a train enthusiast, he even built his own train, enjoyed giving train rides and was a large part of the community. Bob being a jack of all trades, he served on numerous boards, Director of the Civil Defense in Romeoville, built cabins at Yogi Bear Campground in Millbrook. He owned the YE Ole Shoe Shoppe making artwork out of horseshoes. He enjoyed feeding the birds, and collecting aluminum cans. His family was the most important thing in his life and he enjoyed spending time with them, and his best friend and dog Charlie. He is survived by his wife of 50 years, Mary Ellen; his six children, BethAnne (Robert) DaVanon of Millington, IL, Deborah Roberts of Glendale Heights, IL, Cheron Schmitz of Elgin, IL, Wayne (Elizabeth) Storm of Grant Park, IL, Michael (Pat Campbell) Frazer of Arizona, and Russell (Pam) Storm of Millington, IL; 15 grandchildren; 21 great grandchildren. He was preceded in death by both his parents, and his grandson, Joseph Frazer. According to Bob’s wishes there will be no visitation and a Celebration of his life will be held at a later date. Arrangements were entrusted to Turner-Eighner Funeral Home in Plano, IL. For more information or to sign the online guest book go to www.EighnerFuneralHomes.com Turner-Eighner Funeral Home 3952 Turner Ave. Plano, IL 60545 (630) 552-3022

The family of Robert C. "Choo Choo Bob" Storm created this Life Tributes page to make it easy to share your memories.

Send flowers to the Storm family.