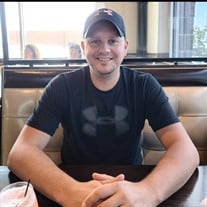 Robert J. “Jake” Gray, 38, of Somonauk, IL. passed away Sunday, November 21, 2021 as a result of an automobile accident. He was born February 2, 1983 in Winfield, IL. the son of Robert and Julie (Chapin) Gray. He married Amber Adkins on August 21, 2002 in Sycamore, IL. He proudly served 4 years in the U.S. Air Force. Jake enjoyed dirt biking, snowboarding, traveling and while traveling he took a liking to scuba diving. He was an avid Notre Dame and Chicago Bears fan. Jake was passionate about coaching basketball and baseball. His greatest love of all was spending time with his family and friends. He is survived by his wife, his three children, Nicolas, Tyler, and Abigale “Peanut Butter and Jelly” Gray of Somonauk, IL.; his parents of Sandwich, IL.; two brothers, Sam Gray of Joliet, IL. and Dan Gray of Aurora, IL.; three nieces, Alexa, Aubrey, and Ava Gray of Plainfield, IL.; his mother-in-law, Robyn Adkins of Sandwich, IL. and one brother-in-law, Nathan Adkins of Sandwich, IL. He was preceded in death by his paternal grandparents, George and Virginia Gray, his maternal grandparents, Harry Chapin and Barb Williams and his father-in-law, Mike Adkins. Funeral Service will be held at 1:00 p.m. on Saturday, November 27, 2021 at the First Apostolic Church in Sandwich, IL. with Pastor Titus Johnson officiating. Visitation will be from 11:00 a.m. until the time of service at 1:00 p.m. on Saturday, November 27, 2021 at the First Apostolic Church in Sandwich, IL. The family has requested casual attire. In Lieu of flowers memorials may be directed to the family. For more information or to sign the online guest book please go the www.EighnerFuneralHomes.com. Burkhart-Eighner Funeral Home 606 E. Arnold Street Sandwich, IL. 60548 (815) 786 2165

The family of Robert "Jake" Gray created this Life Tributes page to make it easy to share your memories.

Send flowers to the Gray family.