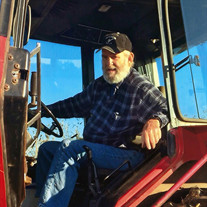 Robert “Bob” L. Smith, 81, of Yorkville, IL, passed away Tuesday, December 17, 2019 at Rush-Copley Medical Center in Aurora, IL. He was born November 20, 1938 in Aurora, IL, the son of Harold J. and Cecilia “Ceil” (Matsel) Smith. He was united in marriage to Lynn M. Hankes on April 30, 1960 and spent 55 years together until her passing in 2015. Bob was a proud member of the US Army, serving from 1956-1962, where he built bridges in Germany. That is how he learned the construction trade. He was a 60-year member of the International Union of Operating Engineers Local 150 and he was a member of Yorkville American Legion. Bob started farming at age 11 for area farmers and in 1965 he and Lynn purchased the family farm. He was a Foreman for Davis Construction for many years until he and Lynn opened R.L. Smith Construction, Inc. Bob was an avid Bears fan and enjoyed watching the Cubs. He also enjoyed having coffee with his farming buddies. Bob was a loving husband, father, grandfather, great-grandfather, brother, and uncle who will be deeply missed by his family and friends. He is survived by three daughters, Karen (Gregory) Craig of Sandwich, IL, Kathleen (Mary Cook) Smith of Naples, FL; and Kristy (John Enlow) Brown of Yorkville, IL; one niece, Kellie (David) Crue of Mesick, MI, four grandchildren, Aaron (Dusty) Brown of Sandwich, IL, Jacob (Kristen) Brown of Yorkville, IL, Benjamin Craig of Sandwich, IL, and Bradley (Bridgette Edmeier) Craig of Sycamore, IL; five great grandchildren, Grace, Jaxon, Owen, Tucker, and Lila Brown; one brother-in-law, James (Cena) Hankes of Quartzsite, AZ; and several nieces, nephews, and friends. He was preceded in death by his parents, his wife, Lynn, one grandson, Christopher Lee Brown, one brother, H. Dean Smith, and his wife, Lois Smith. Private Memorial Service will be held at a later date. Arrangements were entrusted to Turner-Eighner Funeral Home in Plano, IL. In lieu of flowers, memorials may be directed to the family to be divided among Bob’s favorite charities. For more information or to sign the online guest book go to www.EighnerFuneralHomes.com Turner-Eighner Funeral Home 3952 Turner Ave. Plano, IL 60545 (630) 552-3022

The family of Robert "Bob" L. Smith created this Life Tributes page to make it easy to share your memories.

Send flowers to the Smith family.