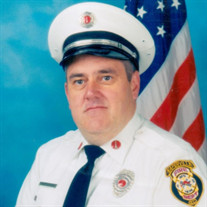 Robert “Bob” Jesse Jackson, 73 of Sandwich, Illinois passed away Tuesday, April 20, 2021 in Polk County, Florida as the result of an automobile accident. He was born June 23, 1947 in Chicago, IL the son of Jesse Horace and Mary Louise (Diefenthal) Jackson. Bob married Kathleen Ann Yanz on February 21, 1970 in Villa Park, IL. He was a volunteer firefighter with Villard and Lombard Fire Departments prior to being hired at Naperville Fire Department as a Firefighter/Paramedic retiring at the rank of Lieutenant after 30 years of service. He is survived by his father Jesse Jackson of Foley, AL, His children; Scott (Terri-Sue) Jackson of North Aurora, IL, Cherie Jackson of Frostproof, FL, Robert (Elizabeth) Jackson of Yorkville, IL, and Jennifer (Tom) Stahl of Somonauk, IL; four grandchildren, Matt, Ariel, Ryan, and Mike, and one great grandson, Cameron; one sister, Donna Enger of Foley, AL; and one brother, Daniel (Audrey) Jackson of Northlake, IL, and several nieces and nephews. He was preceded in death by his mother, his wife Kathleen, and his two brothers, Barry and Ronald Jackson. Visitation will be from 4:00 to 8:00 p.m., Wednesday, May 5, 2021 at Turner-Eighner Funeral Home in Somonauk, IL. With a bell ringing ceremony by the Naperville Fire Department, and a Fire Department walk-thru at 7:00 p.m. In Lieu of flowers memorials may be directed to N.P.F.F.C. at https://npffc.org Cremation was entrusted to Turner-Eighner Funeral Home in Somonauk, IL. For more information or to sign the online guest book go to www.EighnerFuneralHomes.com Turner-Eighner Funeral Home 13160 W. RT 34 ~ P O Box 404 Somonauk, IL 60552 (815) 498-2363

The family of Robert "Bob" Jesse Jackson created this Life Tributes page to make it easy to share your memories.

Send flowers to the Jackson family.