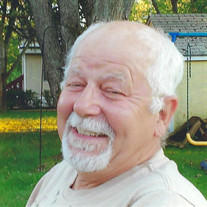 Richard J. “Rick” Wilson, 67, of Somonauk, IL passed away Wednesday, May 6, 2020 at Advocate Lutheran General Hospital in Park Ridge, IL. He was born June 5, 1952 in Peoria, IL the son of Lawrence and Jacqueline (Ceas) Wilson. He married Eileen Ann Privratsky on March 19, 1988 in St. Charles, IL. Rick was a member of UAW Local 145 & 906. He worked at Caterpillar in Montgomery, IL for over 30 years and later worked for H.C.C. in Mendota, IL until his retirement in 2015. He loved his music and enjoyed camping. Most of all he enjoyed spending time with his family and friends and putting a smile on anyone’s face that he could. He is survived by his wife, Eileen; three daughters, Laura Paver of Somonauk, IL, Jennifer Wilson of Montgomery, IL, Stephanie (Jeremy Hooker) Wilson of Somonauk, IL; nine grandchildren, Joshua, Luke, Hannah, Thomas, Mason, Anthony, Ken, Rhaena, and Jacob; one great grandson, Jaxon; one sister, Brenda (Carl) Theobald; three brothers, Larry (Nita) Wilson, Randy Wilson, and Jeff Wilson; one daughter-in-law, Mary Paver; and many nieces and nephews. He is preceded in death by his parents; one son, Erik Paver; one sister, Kim Fromherz; and one brother, David Wilson. Private Prayer Services will be held at Turner-Eighner Funeral Home in Somonauk with Father Andy Davy M.I.C. officiating. A celebration of life will be held at a later date. For more information or to sign the online guest book go to www.EighnerFuneralHomes.com Turner-Eighner Funeral Home 13160 Rt. 34 W ~ P O Box 404 Somonauk, IL 60552 (815) 498-2363

The family of Richard J "Rick" Wilson created this Life Tributes page to make it easy to share your memories.

Send flowers to the Wilson family.