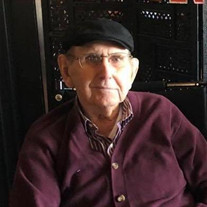 Richard (Lyle) Wald, 90, of Earlville, IL passed away Wednesday, February 6, 2019 at Willow Crest Nursing Pavilion in Sandwich. He was born March 11, 1928 in Sycamore, the son of Richard and Sophia (Peterson) Wald. He married the love of his life, Marion J. Grandgeorge, on September 24, 1960 at the United Presbyterian Church in Somonauk. Lyle was an active member of the Rollo Congregational United church of Christ in rural Earlville since 1937. He was involved in various Church organizations and boards including roles as a trustee and Deacon. He was also involved in the Earlville Lion’s Club and Jaycee’s. He graduated from Rollo High School in 1945. Working alongside his father, Lyle became a grain and livestock farmer. Lyle farmed in the Earlville/Rollo area for more than 50 years. He was a loving and supporting husband who adored his wife, Marion, who preceded him in death by only 26 days. These soulmates lived together for 58 years and left this world together. While Marion worked in the evening as a nurse, Lyle took care of their boys – his pride and joy. His family was his life and he was a supportive and devoted father, always putting their interests first. Remembered by his sons for the great meals he would prepare when taking care of them – especially his burgers, steak dinners and signature chili. (And from time to time TV dinners!) In addition to his boys, Lyle was very close to his brothers and sisters and enjoyed his extended family of nieces and nephews on both his and Marion’s side. Lyle introduced his boys to aspects of farming, working in the fields and raising sheep and cattle, instilling all that he had learned. He loved gardening (he would “over-grow” and share the bounty of zucchini, tomatoes, and green beans to those in need and neighbors in the area). Lyle loved people and they loved him. He was a conversationalist. He was a gentle and sweet man who cared very much for his family, his community, his friends, and his church. Lyle was especially bonded with his very good friend Harold Svendsen, (and wife Judy) who was a groomsman in his wedding. They remained lifelong friends and Harold often visited with him at home and in the nursing home. Lyle loved baseball and was a passionate Cubs fan…and finally got to see them win the World Series in 2016! He had a passion for food and trying new things. He enjoyed a beer with friends, bowling, playing cards, and he enjoyed traveling - mainly to the West coast with the family to see his sister, Dorothy or son, Brad – and even overseas to Holland and Paris once to visit Brad. In later years when Marion was less able, Lyle stepped up and took care of her, kindly preparing her meals and helping her around the house. He was selfless, humble, kind, and a friendly soul who will be missed greatly by his family. Special thanks to caretaker Susan Sigmund and the wonderful nurses and staff at Willow Crest Nursing Pavilion, especially Megan and Cher. And thanks also to Pastor David for his many visits to both Lyle and Marion at home and in the nursing home. He is survived by his four sons: Bryan Wald of Earlville, IL, Bradley (Sherif Tawfik) Wald of Portland, OR, Ronald Wald of Earlville, IL, and Randall (Jackie Mascenic) Wald of Sycamore, IL; two sisters-in-law, Lucille Mickey of Garden Prairie, IL and Evelyn (Jack) Smith of Sandwich, IL; numerous nieces, nephews, cousins, and friends. He was preceded in death by his parents, his wife, his sisters, Dorothy Fierro and Gladys Holtman, and his brothers, Mervin Hetland and Alvin Hetland. Funeral Services will be held at 11:00 a.m., Thursday, February 14, 2019 at Rollo Congregational United Church of Christ, 2471 Weddell St. rural Earlville, IL with Rev. David Marquardt officiating. Burial will follow in Stevens Cemetery rural Earlville. Visitation will be from 10:00 a.m., Thursday, February 14, 2019 at the church until the time of service. Memorials may be directed the family to be divided amongst Lyle’s favorite charities. Arrangements were entrusted to Hanley-Turner-Eighner Funeral Home in Earlville, IL. For more information or to sign the online guest book go to www.EighnerFuneralHomes.com Hanley-Turner-Eighner Funeral Home 407 S. Ottawa St. ~ Box 808 Earlville, IL 60518 (815) 246-7184

Richard (Lyle) Wald, 90, of Earlville, IL passed away Wednesday, February 6, 2019 at Willow Crest Nursing Pavilion in Sandwich. He was born March 11, 1928 in Sycamore, the son of Richard and Sophia (Peterson) Wald. He married the love of... View Obituary & Service Information

The family of Richard "Lyle" Wald created this Life Tributes page to make it easy to share your memories.

Send flowers to the Wald family.