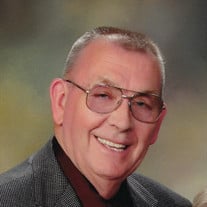 Richard L. “Dick” Delp, 82, of Sandwich, IL, passed away Sunday, July 28, 2019 at Willow Crest Nursing Pavilion in Sandwich. He was born August 12, 1936 in Morris, MN, the son of Lyle E. and Mabel May (Beaver) Delp. He married Beverly Jean Buckardt. Dick was a member of St. John’s Lutheran Church in Somonauk, IL. He was a proud Veteran of the US Air Force, having served from 1956-1959. Dick was the Swine Superintendent and Board Director at the Sandwich Fair for many years. He worked at Caterpillar for several years. Before retiring, Dick worked as a mechanic for several implement dealers in the area. He was a Somonauk FFA volunteer, touching several students’ lives. Dick enjoyed spending time and contributing to the Sandwich Fair. Most of all he loved spending time with his family. He is survived by his wife, Beverly; four daughters, Jamie (Tom) Narron of MO; Penni (Garland) Spoonmore of Somonauk, IL, Patti (Addison) Sharpe of Mt. Vernon, IL, and Jacki Choate of MN; one stepdaughter, Angela (Chris) Goulding of Hoffman Estates, IL; five grandchildren, Jennifer (Bob) Conaway, Alesia (Nick) Flory, Jeremy (Shanna) Spoonmore, Charles Spoonmore, and Zachary Goulding; three great grandchildren; one sister, Judith (Dan) Hays of NY and FL; several nieces and nephews. He was preceded in death by his parents. Funeral Service will be held at 11:00 a.m. on Saturday, August 3, 2019 at St. John’s Lutheran Church in Somonauk, with Reverend Chris Schoon officiating. Burial will follow at Oak Ridge Cemetery in Sandwich, IL. Visitation will be from 9:00 a.m. until the time of service at 11:00 a.m. at the church in Somonauk. Memorials may be directed to St. John’s Lutheran Church or Open Door Rehabilitation. For more information or to sign the online guest book, go to www.EighnerFuneralHomes.com Turner-Eighner Funeral Home 13160 Rt 34 W ~ PO Box 404 Somonauk, IL 60552 815-498-2363

The family of Richard "Dick" L. Delp created this Life Tributes page to make it easy to share your memories.

Send flowers to the Delp family.