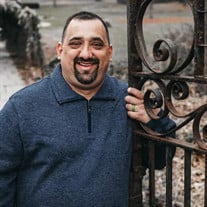 Reynaldo S. Cervantes loving father, husband, and friend passed on Friday, December 4, 2020 at Rush Copley Hospital in Aurora IL. To his friends and family, he was affectionately known as Rey, or as his wife loved to call him, “My Big Guy”. Rey had an unconditional passion for working with children with disabilities which he spent the last five and a half years doing in a professional capacity. He met the love of his life 21 years earlier, which led to them both volunteering for the Special Olympics. Learning Kristie was involved in education helped guide his passion, and it was then that he became a true partner in education and life. He later became a soccer coach, a food connoisseur, a member of Fringe Division paintball team, and an avid fan of Disney where he and his family visited yearly. Rey took pride in every activity he participated in regardless of if it was hosting a foreign exchange student, coaching his son’s soccer teams, or simply spending time with his family. It is not until we depart from this place that we truly realize the impact a person has on others, and the untimely departure has blessed Kristie and his family with an outpouring of stories where Rey impacted so many people with whom he met regardless of if it was a one-time encounter, or a life-long friendship. He has been described as “having a big heart [and] being an all-around nice guy.” Although he is no longer with us, his smile and laughter will remain with us always. There wasn’t a person alive who could see him smile or hear his laugh and not immediately feel comfortable, welcomed, and loved. Rey is the oldest of three children. He grew up in Tucson, AZ. and moved to Aurora, IL, when he was nine, and remained in IL since. He is survived by his wife, Kristie, and their three sons, Tristin, Riker, and Francesco, as well as his two siblings, Alejandro and Sabrina. He is also survived by his mother, Elaine Cervantes, and maternal grandmother, Margaret Duarte, and Cherie Finchum and Leonel Bravo, his God-mother and God-father. Rey departed much too early, but the lasting the impression he left on so many of us will be a legacy untouched by any. Private family services will be conducted. For more information, or to sign the online guest book, go to www.EighnerFuneralHomes.com. A live feed will be available through Turner Eighner Facebook page. In lieu of flowers, contributions to a future scholarship fund may be sent to the family. A celebration of life will be held on Rey’s birthday, April 11th. Time and location will be announced at a later date. Turner-Eighner Funeral Home & Crematory 3952 Turner Avenue Plano, Illinois 60545 (630) 552-3022

Reynaldo S. Cervantes loving father, husband, and friend passed on Friday, December 4, 2020 at Rush Copley Hospital in Aurora IL. To his friends and family, he was affectionately known as Rey, or as his wife loved to call him, &#8220;My Big... View Obituary & Service Information

The family of Reynaldo S. "Rey" Cervantes created this Life Tributes page to make it easy to share your memories.

Send flowers to the Cervantes family.