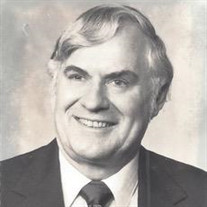 Ralph Emerson de Werff, 1927 – 2019, age 92, of Given’s Estates in Asheville, North Carolina, formally of Bloomington, Illinois and Hendersonville, North Carolina passed away on October 1,2019 in Asheville, North Carolina from health complications due to Pneumonia. Ralph was born April 16, 1927, to Henry August and Maddie Florence de Werff in Eureka, Illinois. He was active in high school sports all four years and the Captain of the Rollo Township High School Basketball team. He graduated from Rollo Township High School in 1945. He went on to attend his parents’ alma mater and graduated from the University of Illinois on June 16, 1950, with a Bachelor’s Degree, He was married to Barbara Baker de Werff for 55 years until Barbara’s death in 2005. He is the proud father of 6 children, 13 grandchildren and 10 great-grandchildren. Ralph served as a Captain in the United States Air Force, and spent a year in Korea before completing his military duty at Fort Shaw in December 1957. Ralph was an agent for State Farm Insurance in Bloomington, Illinois until retiring in July 1988. Ralph and Barbara retired to Hendersonville, NC, where Ralph is currently a member of Ashville’s New Hope Presbyterian Church and is survived by his current wife Elaine D. de Werff of Asheville, his sister Adele Stevens of Arlington, VA, and 4 daughters, 2 sons, and 10 great-grandchildren. Proceeded in death by his wife of 55 years was Barbara Baker de Werff. A graveside service will be held on Monday, October 14, 2019, at 11:00 a.m. The gravesite is in Stevens Cemetery in rural Rollo,Illinois. Military Honors by Earlville American Legion Post # 549. For more information or to sign the online guest book go to www.EighnerFuneralHomes.com (815) 246-6491 Shuler Funeral Home in Hendersonville, NC and Hanley-Turner-Eighner Funeral Home in Earlville, IL are handling the funeral arrangements.

The family of Ralph Emerson de Werff created this Life Tributes page to make it easy to share your memories.