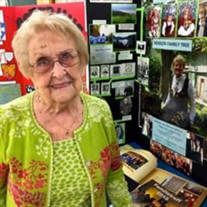 Phyllis N. Knutson Benson May 13 1921- December 20, 1921 Phyllis Knutson Benson of Sandwich died peacefully in the Comfort Care Unit of Valley West Hospital on Monday, December 20, 2021. She was born on Friday, the 13th of May, 1921, in the hospital in Waterman, Illinois. She was the daughter of Andrew Bernie Knutson and Pearle Emily Keene. Phyllis married Russel J. Benson on May 17, 1942, and they were life partners for 62 years. She was preceded in death by her husband Russel, her sister Eldonna Knutson and her parents, Andrew “Bernie” and Pearle Emily Knutson. She is survived by three daughters; Connie (Chuck) Kross of Sandwich, Barb (Ken) Johnson of Yorkville, and Joni (Al) Koehler of Sandwich; eight grandchildren, Christy (Tim) Cordt, Corey (Greg) Zabukover, Greg (Candy) Johnson, T.J. (Andrea) Johnson, Matthew Johnson, Andrew (Erika) Koehler, Jake (Meagan) Koehler and Ben (Monique) Koehler; and her great grandchildren; Drew and Evan Cordt, Jack Zabukover, Brooke and Cole Johnson, Nels and Leif Johnson, Andrew and Lukas Koehler, Jimmy and Mikey Koehler, and Kinsley Burns. Mrs. Benson was a career educator who attended and taught in a one-room schoolhouse. She earned teaching degrees from Northern Illinois University and Aurora University and taught third grade in Sandwich at Haskin and Prairie View elementary schools. She was a lifelong learner and genealogist who wrote her autobiography, “From Horse and Buggy to the Moon,” which chronicled her life as a child growing up on a farm in rural America, her life during the depression, WWII, and her experiences witnessing the space age as the wife of a member of the Titan Missile Project. She was a member of the Cleng Peerson Sons of Norway Lodge, General John Stark Daughters of the American Revolution Lodge and the Fox Valley Community Center where she was an avid Bridge player. Funeral arrangements are being made by Turner-Eighner Funeral Home in Somonauk, IL, where visitation will be held from 11:00-1:00 on Thursday, December 23, 2021 followed by a funeral service at 1:00. Burial will follow in Leland Cemetery Leland, IL. In lieu of flowers memorials may be sent in her name to the American Heart Association or the Fox Valley Community Center. For more information or to sign the online guest book go to www.EighnerFuneralHome.com Turner-Eighner Funeral Home 13160 W. RT 234 ~ Box 404 Somonauk, 60552 (815) 498-2363

The family of Phyllis N. Benson created this Life Tributes page to make it easy to share your memories.

Send flowers to the Benson family.