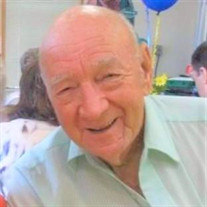 Paul E. Staples, 88, of Ft. Myers Beach FL passed away Wednesday, September 15, 2021 at his home. He was born October 23, 1932 in Hannibal, MO the son of Owen Edgar Staples and Lorena Katherine (Gibbons) David. He married Judith Ann Ardrey on December 24, 1954 in Hannibal, MO. They moved to Illinois in 1956 for Paul’s employment. Paul was a member of the International Brotherhood of Electrical Workers Local 461 for over 64 years. He was a Mason with the Yorkville Chapter since 1974. He enjoyed fishing, playing cards, and wood carving, but his greatest love of all was spending time with his family. He is survived by his wife, Judith Staples; his children, Shelley (Curtis) Butler of Yorkville: Kerri (Ken) Wilson of Yorkville: Mike (Lisa) Staples of Woodstock GA: Craig (Laurie) Staples of Somonauk; seven grandchildren, Jason Wilson, Denny Butler, Maegan Walker, Amanda Butler, Bret Staples, Sara Sterritt, Taylor Staples; and 13 great grandchildren. He was preceded in death by his parents, Owen Staples and Lorena David. Funeral Service will be held at 1:00 p.m. Wednesday, September 22, 2021 at Turner-Eighner Funeral Home in Plano, IL with Rev. Timothy C. Rhodes officiating. Burial will be held following the service at Elmwood Cemetery in Yorkville, IL. Visitation will be from 11:00 a.m. until the time of the service at Turner-Eighner Funeral Home in Plano, IL. For more information, please go to www.EighnerFuneralHome.com Turner-Eighner Funeral Home 3952 Turner Ave Plano, IL 60545 (630) 552- 3022

The family of Paul E. Staples created this Life Tributes page to make it easy to share your memories.

Send flowers to the Staples family.