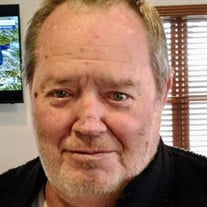 Paul A. Linden, 76, of Plano, IL passed away Wednesday, November 11, 2020 at Central DuPage Hospital in Winfield, IL. He was born August 17, 1944 in Mendota, IL the son of Albert and Edith (Prentice) Linden. He married the love of his life, Josephine Logan on December 28, 1985. He was a proud Veteran of the US Navy having served on the USS Independence. He worked at Caterpillar in Aurora, IL for 42 years. He was a member of the Jaycees in Sandwich, The Moose Lodge of Sandwich, and spent fifteen years as a Sandwich Boys Baseball Coach in the late sixties and seventies. He was former secretary of the Aurora Bowling Congress, and was inducted into the Bowling Hall of fame. He enjoyed bowling but his true passion was golfing. Most of all he enjoyed spending time with his golf buddies at Cedardell Golf Club in Plano. He is survived by his children, Jeff (Molly) Linden of Sandwich, IL, and Deborah (Hector) Reyes of Sandwich, Lisa Wilborn, and James (Trish) Logan; nine grandchildren, David (Nikki) Thomas who Paul raised and treated like a son, Aaron (Katelyn) Linden, Alex (Maria) Linden, Brittany Reyes, Zachary Reyes, Aidan Linden, Amy Jo (Takota) Labaume, Casey (Tabitha) Wilborn, Colten King; four great grandchildren, Alyssa, Alexa, Addilyn, and Anistyn and one more soon to be, the mother of his children, Marla Perry of Plano, IL; two brothers, Albert (Patricia) Linden, Jr, and David (Lynette) Linden, and several nieces and nephews. He was preceded in death by his parents, his wife Josephine, two children, Lori Fiscus, and Lynn Saiter. Funeral Services will be held at 1:00 p.m., Tuesday, November 17, 2020 at Turner-Eighner Funeral Home in Plano, IL, with Pastor Stevan Saunders officiating. Burial will follow in Millington-Newark Cemetery in Millington, IL. Visitation will be from 10:00 a.m. on Tuesday, November 17th until the service at 1:00 p.m. Memorials may be directed to a fund being established to help a young golfer at Cedardell Golf Club in Plano, IL. The Funeral Service will be Live Streamed on the Turner-Eighner Funeral Home & Burkhart-Eighner Funeral Home Facebook page. For more information or to sign the on-line guest book go to www.eighnerfuneralhomes.com. Turner-Eighner Funeral Home 3952 Turner Ave. Plano, IL 60545 630 552-3022

Paul A. Linden, 76, of Plano, IL passed away Wednesday, November 11, 2020 at Central DuPage Hospital in Winfield, IL. He was born August 17, 1944 in Mendota, IL the son of Albert and Edith (Prentice) Linden. He married the love of his... View Obituary & Service Information

The family of Paul A. Linden created this Life Tributes page to make it easy to share your memories.

Paul A. Linden, 76, of Plano, IL passed away Wednesday, November...

Send flowers to the Linden family.