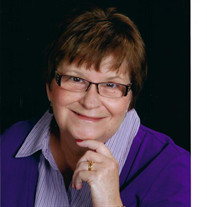 Patricia Ann Ferguson (Griffin) May 28, 1945 – April 12, 2022, 76 years of age of Palm Springs California died peacefully in her home with her son Bruce by her side. She was married June 9, 1963, to Lynn Ferguson (October 3, 1941 – July 30, 1991) Pat was preceded in death by her parents Homer and Ethel (Wensil) Griffin and husband of 28 years, Lynn Ferguson. She is survived by her three sons Lynn (Kathy) Ferguson; Bruce (Edwin) Ferguson; and Brian (Rachel) Ferguson; seven grandchildren Heath Ferguson; Thomas (Allison) Ferguson; Lindsay (Jesse) Vidito; Jill (Michael) Tuymer; Riley (Carley) Ferguson; Nick Ferguson; Liam Ferguson and eight great grandchildren Samuel and Lauren Ferguson; Raeghan and Jackson Vidito; Denim, Dane, Cora and Claire Tuymer. Pat spent her childhood living with her mother in Charlotte, North Carolina. She moved to Plano, Illinois her freshman year where she became the first person in her family to graduate from high school. While in school she met the love of her life Lynn Ferguson. They were married shortly after graduation and spent the next 28 years together farming in Sandwich, Illinois. Her years on the farm with her husband and raising her three boys were some of her richest times. After Lynn’s death, she entered a new chapter of life that was equally as rich. Pat’s Playhouse became the place for her to shower her love on her grandchildren and countless new relationships with day care children and their parents. Truly a time of new beginnings that created lifelong relationships. Pat’s love of family took her to new places. First to Hudson, Wisconsin when her youngest grandchild was born, then to Cincinnati, Ohio, and finally to Palm Springs, California. In each of these places she quickly made new friends who touched her life in wondrous ways. Beyond new friends, Pat always found a new faith community. Mt Zion, First Lutheran, Lutheran Church of the Resurrection and River of Hope each uniquely fulfilled her deep need to practice her faith in community. Her final year of life was a new type of journey as she embraced and lived with all the challenges cancer brings. Just ten days before her death she was able to witness the marriage of her dear niece Julie (Bart) Seager. This celebratory gathering of family and friends in her home might just be the best example of how she wished every day of life to be. Finally, the story of Pat is not complete without a message of faith. When asked what word had the most meaning to her, she said grace. Grace, because it is only by God’s gracious and protective hand that she was able to be blessed with such a wonderful and love filled life. Pat’s funeral service will take place Saturday, April 30, at Burkhart-Eighner funeral home in Sandwich, Illinois. Visitation will be 9:00-11:00, service at 11:00 with internment immediately to follow at Pratts Oak Lawn Cemetery rural Sandwich, IL. A luncheon will be served at Fox Valley Older Adults center. Memorial gifts can be made in Pat’s memory to Our Sharing Pantry at St John’s Lutheran Church in Somonauk, Illinois. Pat was the founder of the Sharing Pantry. In 1987, in recognition for her work, she received the DeKalb County Good Samaritan award. Jesus asked the question, who is your neighbor. The answer was the one who shows mercy. Pat had neighbor’s wherever she went. For more information or to sign the online guest book go to www.EighnerFuneralHomes.com Burkhart-Eighner Funeral Home 606 E. Arnold Road Sandwich, Illinois 60548 (815) 786-2165

The family of Patricia Ann (Griffin) Ferguson created this Life Tributes page to make it easy to share your memories.

Send flowers to the Ferguson family.