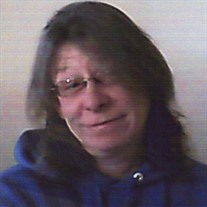 Patricia Lynn “Trish” De Jonghe 56 of Mendota, IL (formerly of Earlville, Leland and Hinckley) passed away peacefully in her sleep on February 5th, 2021 after a courageous battle with breast cancer. She was born in Kenosha, WI on November 8th, 1964 to Edward W. Carmickle and Freda B. Carmickle (nee Mabrey), and grew up in the area of Kaneville and Hinckley. She was united in marriage to Richard Edmond De Jonghe on May 9th, 1983 and they spent nearly 23 years together before his passing on April 20, 2006. Anyone who knew Trish, knew that she had a big heart. Every conversation with a loved one ended in her saying “Love Me bye!” Because tomorrow is never promised, and if that was your last conversation with someone, you wanted them to know they were loved. She “adopted” many “strays” (as she affectionately referred to them) who called her Ma, and their children were welcome to call her Grandma, Mema, or Damma. She loved each of them as if they were her own. With a big heart, comes a big spirit too. Trish was strong-willed, and never afraid to speak her mind. Despite her small stature (“I’m not short! I am average. The rest of you are just giants.”), she was a formidable opponent in any fight… but she was an even greater ally. If she was in your corner, she would fight with everything she had until the bitter end for you. And if you ever won against her, you could rest assured she had probably let you. Her greatest joy in life was being a grandmother. Her Jay Baby, Diva, CorvaRooni, and Little Dude were her world, and she made sure they knew she loved them “To the moon and back.” She would have done anything for them, no matter the cost. Spending the last couple years with them close enough to simply run across the yard to see her was the greatest gift she’d ever been given. She loved having them come and go as they pleased, like her home was simply an addition to theirs, and actively encouraged it. Like any grandma, they could do no wrong in her eyes, and she was usually helping them to find a bit of mischief when their Mama wasn’t looking. She is survived by two daughters: Sarah De Jonghe (Edward Taylor) of Mendota, IL; Allison Hertz (Dan Kuhn) of Amboy, IL and one son Joseph De Jonghe of Payson, AZ. Four grandchildren: Joseph Hertz, Aimee De Jonghe, Corvin Futrell and Kamden De Jonghe; all of Amboy, IL. Three brothers: Scott (Gina) Carmickle, Fred (Sarah Rossi) Carmickle of Earlville, IL; and David Carmickle of Macomb, IL. One Uncle John (Lynne) Mabrey of Hilham, TN. Four aunts: Ella Ramsey of Livingston, TN; Betty Hemschemeyer of Sheboygan WI; Theresa Richards of Celina, TN; and Faye (Les) Farnsworth of Elkhorn, WI. One brother-in-law Joey (Rita) Winze of Thomasville, NC. Three sisters-in-law: Edwina (Bill) Vincent of Hinckley, IL; Christine Kroemer of Lowden, IA; and Shirley Carlson of Franklin, TN. Many nieces, nephews and cousins. She was preceded in death by her parents, husband, daughter Kathy Lynn De Jonghe, her father-in-law Edmond De Jonghe, mother-in-law Alyce De Jonghe (nee Krzyzanski), brothers-in-law Edmund De Jonghe and Bob Kroemer, sisters-in-law Cindy Carmickle and Donna De Jonghe, and one aunt Barbara Moss. Per her wishes, there will be no service. She did not want anyone to sit around mourning her, but instead would ask that everyone drink a toast in her honor, and recall the good times you had with her. Also, consider making a donation to the American Cancer Society. Arrangements were entrusted to Hanley-Turner-Eighner Funeral Home in Earlville, IL. For more information or to sign the online guest book go to www.EighnerFuneralHomes.com Hanley-Turner-Eighner Funeral Home 407 S. Ottawa St. ~ Box 808 Earlville, IL 60518 (815) 246-6491

Patricia Lynn &#8220;Trish&#8221; De Jonghe 56 of Mendota, IL (formerly of Earlville, Leland and Hinckley) passed away peacefully in her sleep on February 5th, 2021 after a courageous battle with breast cancer. She was born in Kenosha, WI on... View Obituary & Service Information

The family of Patricia Lynn De Jonghe created this Life Tributes page to make it easy to share your memories.