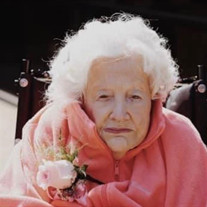 Nola Mae Palmatier, 100, of Sandwich, IL passed away Thursday, October 14, 2021 at Willow Crest Nursing Pavilion in Sandwich, IL. She was born April 6, 1921 in Hinckley, IL the daughter of Vernon and Florence (McDonald) Lee. She married Richard John Palmatier on November 15, 1941 in Aurora, IL. She was a member of Union Congregational Church in Somonauk, IL. Her greatest love of all was spending time with her family, especially her grandchildren. She is survived by one daughter, Bonnie (Charles) Kerley of Somonauk, IL, one son Dick (Nancy) Palmatier of Sioux City, IA, one daughter-in-law Shelia Palmatier of Somonauk, IL; twelve grandchildren; twenty-six great-grandchildren; five great-great grandchildren. She was preceded in death by her parents, her husband, one son John Palmatier, one daughter Virginia Behrens, and her siblings. Funeral Services will be held at 11:00 a.m. on Monday, October 18, 2021 at Turner-Eighner Funeral Home in Somonauk, IL, with Rev. Theodore Engelsdorfer officiating. Burial will follow at Oak Ridge Cemetery in Sandwich, IL. Visitation will be from 9:00 a.m. to 11:00 a.m. on Monday, October 18, 2021 at Turner-Eighner Funeral Home in Somonauk, IL. In lieu of flowers, memorials may be directed to Sunshine Band at Union Congregational Church. For more information, or to sign the online guest book, please go to www.EighnerFuneralHomes.com Turner-Eighner Funeral Home 13160 W. RT 34 ~ Box 404 Somonauk, IL 60552 (815) 498-2363

The family of Nola Mae Palmatier created this Life Tributes page to make it easy to share your memories.

Send flowers to the Palmatier family.