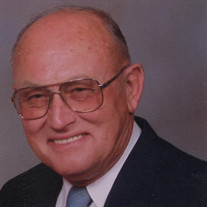 Merlyn J. Wiley, 94, of Somonauk, IL passed away peacefully Saturday, March 9, 2019 at his home in Somonauk. He was born March 6, 1925 in Waterman, IL the son of James Edgar and Elrie Ida Marie (Rimsnider) Wiley. He married Rogene Gittleson on May 29, 1948 in DeKalb, IL. He was an active member of St. Paul’s United Church of Christ in Hinckley, IL, where he was a past president and served on various boards. He was a member of Somonauk Volunteer Fire Department for 25 years, and the Somonauk American Legion. Merlyn was a proud veteran of the United States Army, stationed in Okinawa, Japan during WW II. He worked for Stahl / Curran Construction, and was member of Local #150 Operator’s Union for over 50 years. He loved to refurbish antique cars, going to car shows, and was a proud owner of a 1929 Model A Sport Coupe which he enjoyed driving in many parades. Most of all he loved spending time with his family and many friends. He is survived buy two sons, Roger (Sharon) Wiley and Dennis (Susan) Wiley both of Sandwich, IL; two granddaughters, Christina (Matthew) Pierce of Batavia, IL, and Kendra Wiley of Sandwich, IL; five great grandchildren, Emmerson, Hudson, and Landon Pierce, Frankie and Gabe Barajas; one brother Dealas (Connie) Wiley of Somonauk, IL; one sister-in-law, Rosemary Wiley of Leland, IL, and several nieces and nephews. He was preceded in death by his parents, his wife Rogene, one brother David Wiley, and one sister, Leaon Rae Schafman. The family would like to thank Dr. Erik Englehart and his staff, Northwestern DeKalb County Hospice, his special friend and caregiver Anita Hollingsworth, and his home caregiver Ella Ramonovskaya. Funeral services will be held at 10:00 a.m., Thursday. March 14, 2019 at St. Paul’s United Church of Christ in Hinckley, IL with Pastor Charlene Hinckley officiating. Burial will follow in Fairview Park Cemetery in DeKalb, IL. Visitation will be from 4:00 to 7:00 p.m. on Wednesday, March 13, 2019 at Turner-Eighner Funeral Home in Somonauk, IL. Memorials may be directed to the charity of your choice. For more information or to sign the online guest book go to www.EighnerFuneralHomes.com Turner-Eighner Funeral Home 13160 W. RT 34 ~ Box 404 Somonauk, IL 60552 (815) 498-2363

The family of Merlyn J. Wiley created this Life Tributes page to make it easy to share your memories.

Send flowers to the Wiley family.