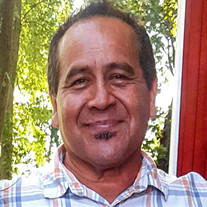 Mario “Al” Arellano, 64, of Yorkville, IL passed away Tuesday, August 24, 2021 at his home with his wife by his side. He was born September 15, 1956 in Moorhead, MN the son of Esteban and Maria Anna (Rodriguez) Arellano. He married Deborah French on September 4, 1976 in Sandwich, IL. He was a Pastor for 22 years, as well as he currently worked as a counselor at Sheridan Corrections Center. Mario was an avid chess player, enjoyed math, and Biblical studies. His greatest love of all was spending time with his family, especially his grandchildren. He is survived by his wife, Deborah Arellano of Yorkville, IL, one daughter Ahren (Joe) Christopherson of South Bend, IN, two son’s Baritt (Kerri) Arellano of Oswego, IL and Jamin (Carla) Arellano of West Chicago, IL; nine grandchildren, Josiah, Jadon, Selah, Landynn, Honor, Evelynn, Zion, Ezra, and Yana; three sister’s Maricela, Abigail, and Elizena, two brother’s Esteban Jr. and Eleazar; and several nieces and nephews. He was preceded in death by his parents, Esteban and Maria Anna Arellano, and one niece Mary Cordova. A Celebration of life will be held at a later date. In lieu of flowers, memorials may be directed to The ALS Association, or the charity of one’s choice. For more information, or to sign the online guest book, please go to www.EighnerFuneralHomes.com Turner-Eighner Funeral Home & Crematory 3952 Turner Ave Plano, IL 60545 (630) 552-3022

The family of Mario "AL" Arellano created this Life Tributes page to make it easy to share your memories.

Send flowers to the Arellano family.