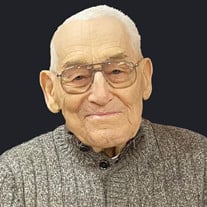 Lyle G. Fritsch, 100, of Sandwich, IL passed away August 18, 2020 at his home surrounded by his family. He was born February 27, 1920 in Plano, IL the son of George and Ruth (Otto) Fritsch. After years of farming, pitching baseball as Fireman Fritsch and serving his country in WWII, Lyle married Eleanor M. Kessler on February 1, 1948. They had eight children and celebrated 54 years together. For many years, Lyle was active in the communities of Somonauk, Rollo, and Shabbona coaching baseball, softball, and basketball, serving on Shabbona School Board, as one of the founding members of the Indian Valley Vocational Center, and as a director for the Dekalb County Farm Bureau. He enjoyed spending time with his friends and family. Some of his favorite times were trips to Minnesota, Hawaii, and the Sandwich Fair. Lyle is survived by seven children; Steve (Maggie) Fritsch of Everett, WA, Mary (Larry) Fritsch-Derrick of Newbury Park, CA, Jim (Dawn) Fritsch of Earlville, IL, Pam Fritsch of Sandwich, IL, Peggy (Michael) Lynn of Green Oaks, IL, Rita (Jay) Carter of Baxter, MN, and Joanne (Brian) Spillar of Wichita, KS; his thirteen grandchildren; thirteen great grandchildren; one sister, Shirley Bauer of Earlville, IL; one sister-in-law Janet Kessler of Somonauk, and several nieces and nephews. He is preceded in death by his parents, George and Ruth Fritsch; his wife, Eleanor; one son, Edward Fritsch; three infant grandchildren; one sister, Helen Johnson; and two brothers, Wiley and Russel Fritsch. A drive through visitation will be held on Saturday August 22, 2020 from 2:00 p.m. to 6:00 p.m. at the funeral home in Somonauk. Please enter from Lasalle Street and exit onto Route 34. Burial will be private at St. John’s Catholic Cemetery in Somonauk, IL. Lyle’s family asks that in lieu of flowers, memorials may be directed to Fox Valley Older Adults Services, a hospice, or charity of ones choice. For more information or to sign the online guest book please go to www.EighnerFuneralHomes.com Turner-Eighner Funeral Home 13160 Rt 34 W ~ P O Box 404 Somonauk, IL 60552 (815) 498-2363

Lyle G. Fritsch, 100, of Sandwich, IL passed away August 18, 2020 at his home surrounded by his family. He was born February 27, 1920 in Plano, IL the son of George and Ruth (Otto) Fritsch. After years of farming, pitching baseball as... View Obituary & Service Information

The family of Lyle G. Fritsch created this Life Tributes page to make it easy to share your memories.

Send flowers to the Fritsch family.