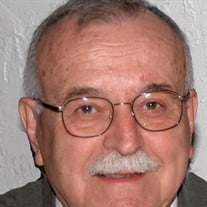 Leonard Filipski, of Sandwich, Illinois, passed away unexpectedly on Saturday, September 19, 2020, at the age of 98. Leonard was born July 19, 1922, in Chicago, to Frank and Anna Filipski. The youngest of four siblings, he grew up during the Great Depression which led him to become a strong and resourceful young man. After serving his country in World War II through the United States Army, he would later go on to meet and marry the love of his life, Marie Hannon. That love would eventually grow to include seven children, twelve grandchildren, twelve great-grandchildren, and two great-great-grandchildren. Leonard, or "Sweet Lenny" as he was jokingly called, was an avid reader and self-educated man who had a penchant for politics, religion, history, and current events. Never one to shy away from a good argument, he could always be counted on for a spirited discussion involving those topics. Leonard was also a great story teller and loved to entertain his children and their friends, and then later his grandchildren, with the adventures of a rough-and-tumble character he created called Simpy Mouse. In his spare time, Leonard enjoyed woodworking and carpentry, even going so far as to build a home in Lake Holiday for he and Marie to begin their retirement. A fighter to the end, Leonard will be remembered as one of the great ones. He will be dearly missed and forever in our hearts. Leonard was preceded in death by his parents; one son, Stephen Anthony Filipski; his sister, Irene Galle; and his two brothers, Roman Filipski and Frank Filipski. He is survived by his loving wife of nearly 72 years, Marie, as well as his children Michael (Lurene) Filipski; Barbara (Jim) Gardine; Joseph (Tina) Filipski; Gary Filipski; David (Denise) Filipski; Diane (Ron) Vermilye; his daughter-in-law Linda Filipski; and his many grandchildren, great-grandchildren, and great-great grandchildren. Visitation will be held Sunday September, 27, 2020, from 2:00p.m. to 6:00p.m. at Burkhart-Eighner Funeral Home, 606 E. Arnold Road, Sandwich, Illinois. A funeral mass will be held Monday, September 28, 2020, at 10:00a.m. at St. John The Baptist Catholic Church, 320 South Depot Street, Somonauk, Illinois. Burial will be private at All Saints Cemetery in Des Plaines, Illinois, on Tuesday, September 29, 2020 at 11:00a.m. In lieu of flowers, memorials may be directed to St. Jude Children’s Research Hospital (stjude.org) or the charity of your choice. For more information, or to sign the online guest book, please go to www.eighnerfuneralhomes.com Burkhart-Eighner Funeral Home 606 East Arnold Road Sandwich, IL 60548

Leonard Filipski, of Sandwich, Illinois, passed away unexpectedly on Saturday, September 19, 2020, at the age of 98. Leonard was born July 19, 1922, in Chicago, to Frank... View Obituary & Service Information

The family of Leonard Filipski created this Life Tributes page to make it easy to share your memories.

Send flowers to the Filipski family.