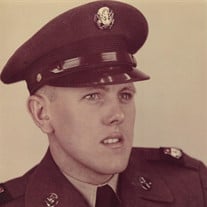 LaVerne Nelson, 89, of Earlville, IL passed away Saturday, April 30, 2022 at his home. He was born December 23, 1932 in Waterman, IL the son of Abraham and Lillie (Sedal) Nelson. He married Carol J. Valentinsen on September 10, 1955 in Ottawa, IL. He was a veteran of the US Army During the Korean War. LaVerne was a carpenter all his life and farmed as well. He built and lived in his home, while enjoying caring for the lawn. He would always lend a helping hand to anyone that needed it. He was a member of St. Petrie Lutheran Church rural Leland, IL. He always enjoyed his fishing trips to Canada, and the many road trips with his dog Bella. LaVerne lost the love of his life Carol in 2018 and missed her immensely. He is survived by two children, Kathy (Jon) Lock of Lexington, IL, and Mark (Tammy Breese) Nelson of Earlville, IL; three grandchildren, Matthew (Hallie) Lock of Danville, IL, Hunter Lock of Lexington, IL and Mya “Myles” Nelson of Streator, IL, and several nieces and nephews. He was preceded in death by his parents, his wife, Carol, and one sister Rose Cissna. According to LaVerne’s wishes there will be no visitation or funeral, and a private burial of his urn will be in Baker Cemetery rural Leland, IL. Cremation was entrusted to Turner-Eighner Funeral Home in Somonauk, IL. Memorials may be directed to IVAR (IL Valley Animal Rescue) to honor his lifelong love of Dogs, or to the Donor’s choice. His son Mark would like to thank the countless friends, neighbors and family members who have supported LaVerne thru the years, especially in his final days. For more information or to sign the online guest book go to www.EighnerFuneralHomes.com Turner-Eighner Funeral Home & Crematory 13160 W. RT 34 ~ Box 404 Somonauk, Illinois 60552 (815) 498-2363

The family of LaVerne Nelson created this Life Tributes page to make it easy to share your memories.

Send flowers to the Nelson family.