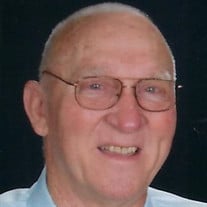 LaVerne G. Fox, 87, of Somonauk, IL passed away Monday, June 22, 2020 at Willow Crest Nursing Pavilion in Sandwich, IL. He was born February 3, 1933 in Somonauk, IL, the son of Ernest and Florence (Witt) Fox. He married Anna Csiszer on November 19, 1971 in Somonauk, IL. LaVerne was a member of St. John the Baptist Catholic Church, Moose 1060, and the Sandwich American Legion. He was in the U.S. Navy from 1952-1953. He worked for Montgomery Construction Company and started farming. He later went on to work for Stahl Construction in Dekalb, IL. He retired from Caterpillar in 1987. LaVerne and Anna loved spending their winter’s in Mesa, AZ. He was very active in woodworking shop, where he was president and made coffee every morning. Due to his health they moved back to Illinois and he started making coffee at the Country Kitchen for all the farmers. LaVerne’s greatest hobby was visiting with his friends. He is survived by his wife, Anna; his children, Cindy Lackey, Craig (JoAnn) Fox, William (Tetiana) Meier, Dawn (Scott) Cessna, and Terrie Raney; ten grandchildren; eleven great grandchildren; two sisters, Virginia Mathies and Darlene (Robert) Larson; and numerous nieces, nephews, and friends. He is preceded in death by his parents; one brother, Donald (Eula) Fox; one son, Chuck (Patti) Fox, one son-in-law, Duane Lackey; and his two brothers-in-law, Hank Matthies and Dr. Karl Csiszer. Private Funeral Mass will be held in LaVerne’s honor. Visitation will be June 27, 2020 from 9:00 a.m. until 10:45 a.m. at Turner-Eighner Funeral Homes in Somonauk, IL. Memorials may be directed to the charity of one’s choice. For more information or to sign our online guest book go to www.EighnerFuneralHomes.com Turner-Eighner Funeral Homes 13160 Rt 34 W ~ P O Box 404 Somonauk, Illinois 60552 (815) 498-2363

The family of LaVerne G. Fox created this Life Tributes page to make it easy to share your memories.

Send flowers to the Fox family.