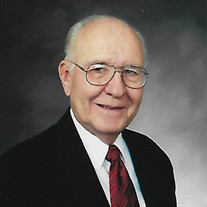 Kenneth L. Stockley, 94 of Earlville, IL passed away Friday, December 10, 2021 in Heritage Health in Mendota, IL. He was born June 3, 1927 in Sandwich, IL the son of Wilbur and Frances (Whittaker) Stockley. Ken attended Dinsmore Country Grade School north of Earlville for 8 years and graduated from Earlville Community High School in 1945. Ken was known by many for his love of flying. He recently told his grandchildren he wished he’d have gotten his pilot’s license when he was 14 instead of 16 years of age. He bought his first plane at age 16. He sold it a few years later to pay for college. Ken graduated from Iowa State University in 1951. He married Donna L. Porter on August 10, 1952 in Knoxville, Iowa. Ken was a member of the Earlville United Methodist Church and the Methodist Men’s Club and served on the United Methodist Foundation. He served his country in the United States Army Medical Service Corp during the Korean War. He was a past President of the Earlville Lions Club, the Earlville School District #9 Board, served on the LaSalle County Board, the Earlville Library Board, and the Board of Review for LaSalle County. He was also a member of Mendota Elks Lodge, and the LaSalle County Farm Bureau. He was also a Past Master of Freedom Masonic Lodge, Scottish Rite Consistory, Mohammed Temple Shrine in Peoria. His first job after college was working for the U of I Extension Service as a Farm Advisor, then he farmed in the Earlville area for 60 years. Most of all he loved spending time with his family. He is survived by his wife Donna, one son Douglas L. Stockley of Earlville, IL, one daughter Debra Chatman of Yorkville, IL, two grandchildren, Christine Chatman and Ryan (Jamie) Chatman, two great grandchildren Sidney and Oliver Chatman, one brother Dale Stockley of Earlville, IL, and several nieces and nephews. He was preceded in death by his parents, one sister Mary Stockley Kennedy, two brothers, James in infancy and Roger Stockley, and one son-in-law Sidney Chatman. Funeral services will be held at 12:00 noon, Saturday, December 18, 2021 at Earlville United Methodist Church 313 Stilson Street in Earlville, IL, with Pastor Sandy Smith officiating. Burial will follow in Precinct Cemetery rural Earlville. Visitation will be from 10:00 a.m. on Saturday, December 18th in the church until the service at noon. Memorials may be directed to Earlville United Methodist Church. For more information or to sign the online guest book please go to www.EighnerFuneralHomes.com Hanley-Turner-Eighner Funeral Home 407 S. Ottawa St. ~ Box 808 Earlville, IL 60518 (815) 246-6491

The family of Kenneth L. Stockley created this Life Tributes page to make it easy to share your memories.

Send flowers to the Stockley family.