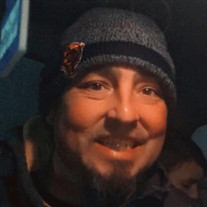 Keith Taylor, 45, of Somonauk, IL passed away Friday, April 24, 2020 in Sandwich, IL. He was born December 7, 1974 in Torrance, California the son of Brian Asmussen and Holly (Tommy “Pops”) Donovan. He married Karen Mickelson on August 19, 2005 in Somonauk, IL. He enjoyed hanging out with his friends, playing bags, golfing, and relaxing while watching movies. When he would go back to California, he loved to spend time at the beach and surf. Keith was an avid fan of the Chicago Bears, who loved attending his children’s sporting events. Most of all he enjoyed spending time with his family. He is survived by his wife, Karen Taylor; his dad, Brian Asmussen of California; his mom, Holly (Tommy “Pops”) Donovan of Hinckley, IL; two daughters, Olivia and Madison Taylor; one son, Brayden Taylor; two sisters, Kelly Asmussen of Cortland, IL, and Kristen Donovan of Cortland, IL; and several aunts, uncles, nieces and nephews. Memorial Services will be held at a later date. For more information or to sign our online guest book, go to www.EighnerFuneralHomes.com Turner-Eighner Funeral Home 13160 Rt 34 W ~ P O Box 404 Somonauk, IL 60552 (815) 498-2363

The family of Keith Taylor created this Life Tributes page to make it easy to share your memories.

Send flowers to the Taylor family.