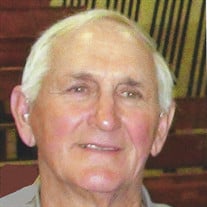 Junior Nick Thomas, 86 of Sheridan, Illinois died Feb. 16, 2021 on his family farm. Junior was born September 11, 1934 in Sandwich, Illinois to Nick and Louise (Bauer) Thomas. He married Betty Whitlock on October 20, 1956 at the Earlville United Methodist Church and they enjoyed 58 wonderful years together. After graduating Leland High School and serving our country, Junior joined the Iron Workers Union Local 393 where he retired after 41 years. In 1958 he began farming in the Sheridan area. Farming was his passion and he spent long days in the fields doing what he loved. He retired from farming in 2006. Junior also sold seed corn for Monsanto and practiced real estate for a short time in Sandwich, Illinois. He was a member of the LaSalle County Farm Bureau, Sandwich Early Day Engine Club and served as a trustee for Northville Township. He was a member of the Earlville United Methodist Church for 60 years and served on the Men’s Club. He enjoyed his retirement working on his farm and restoring antique tractors which he proudly displayed at the Sandwich Fair. He was a loving husband, father, grandfather and uncle who will be dearly missed. Junior was a friend to all. Survivors include; two daughter Jackie Knight of Ottawa and Jill (Randy) Jannusch of Bloomington; one son, John (Carol) Thomas of Sheridan. Five grandchildren, Emily Knight of Surprise, Ariz. , Andrew Knight of Ottawa, Eric (Emma) Thomas of Somonauk, Scott Thomas of Madison, Wisconsin, Ryan Jannusch of Missouri. Junior has 6 nieces and 2 nephews. He was preceded in death by his wife Betty; his parents Nick and Louise; brothers Ronnie, Alexander and Loraine; and niece Rebecca Olsen. Private services were held at Turner-Eighner Funeral Home in Somonauk, IL. Burial followed in Precinct Cemetery rural Earlville, IL. In lieu of flowers, memorials may be directed to Journey Care Hospice or to the Alzheimer’s Association. For more information or to sign the online guest book go to www.EighnerFuneralHomes.com Turner-Eighner Funeral Home 13160 W. RT 34 ~ Box 404 Somonauk, IL 60552 (815) 498-2363

The family of Junior Nick Thomas created this Life Tributes page to make it easy to share your memories.

Send flowers to the Thomas family.