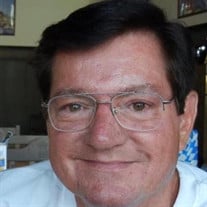 December 7, 1952 – July 30, 2019 Jonathan Franz Kaltenecker (Jon) (JFK) 66, of Newark, IL, passed away peacefully at his home, Tuesday, July 30, 2019, surrounded by his family. He was born in Kansas City, Kansas on December 7, 1952 to Franz and Barbara (Nagl) Kaltenecker. He was a first generation German-American. He was proud of his German heritage and always enjoyed practicing his German and teaching his children and grandchildren about the culture. Jon began his work career at Plano Molding Company on June 1, 1969 at the age of 16. Hired specifically to learn all aspects of the company, so he would be well versed in the company’s processes so he could implement their first computer system. Once he graduated from Plano High School in May of 1971, they sent him for schooling at IBM in Chicago, IL to learn programming and system design. He dedicated 44 years to the company, becoming the company’s first Director of IT while creating, building, and designing multiple system applications, interfaces, and work flows, while training and managing his staff and always striving to improve processes and efficiencies throughout the company. He married Theresa (Clark- Holland) Kaltenecker, 25 years ago on his birthday, December 7, 1994, as he did not want to EVER forget their anniversary. He took pride in his home in Newark and spent many of those 25 years doing remodeling projects as a way to reduce the work/life stresses…or as he called it his “Honey Do” list. He loved to play fast pitch softball and played basketball numerous times per week until his knees could no longer get him up and down the court. Once he could no longer play the physical sports, he found a new love of playing pool and did so for many years each Thursday night as a member of Beecher’s Billiards pool team. The loving family members who survive Jon are his wife Theresa; One son, Aaron (Tina) Kaltenecker and their children, Anthony Franz, Nicholas John, and Isabella Marie of Yorkville, IL; His step-daughters, April (Adam) Sobieray and their children, Grady William, and Gracelynn Audrey, of Grant Park, IL and Samantha (Josh) Buchanan of Mendota, IL; His brothers: Thomas (Sherel) Kaltenecker, and their children, Ryan and Jessica, and Frank (Marjorie) Kaltenecker and their children, Rebecca, Rachel, Lauren, and Caitlyn; Along with his aunts, uncles, and his many cousins, both here in the US and in Germany. He was preceded in death by his parents, and his beloved four-legged fur babies KaCy and Megan. He will be forever loved and missed by his family, friends and his neighbors. Visitation will be from 2:00 to 6:00pm., Friday, August 2, 2019 at Turner-Eighner Funeral Home Plano, IL., with a prayer service to follow, with Deacon Doug Wells officiating. According to Jon’s wishes, cremation rites will be accorded. In Lieu of flowers, memorials may be directed to the donor’s choice in his memory. For more information or to sign the online guest book go to www.EighnerFuneralHomes.com Turner-Eighner Funeral Home 3952 Turner Ave. Plano, IL 60545 (630) 552-3022

The family of Jonathan Franz Kaltenecker created this Life Tributes page to make it easy to share your memories.

Send flowers to the Kaltenecker family.