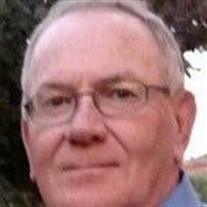 Johnny Lynn Adkins, 64, passed away peacefully on December 23rd, 2019 at his home in Holland, MI after a courageous battle with cancer. John was born on July 16, 1955 in Poplar Bluff, MO to Jackie “Jack” and Doris (McKinzie) Adkins. He was a 1973 graduate of Somonauk High School, Somonauk, IL. John was a Dispatcher for YRC Holland, INC., of Holland MI for over 25 years. He was happily married to his high school sweetheart, Julie (Hill) John had a great sense of humor and never met a stranger. He enjoyed a life of simple pleasures; spending time with his family, listening to great music, riding his Harley, cruising in his hot rod, a bright red Dodge Challenger, and cheering on the St. Louis Cardinals and the Oakland Raiders. John is survived by his wife, Julie; daughter, Jolie; granddaughter, Riley; mother, Doris Adkins; brothers Larry (Kelly) and Keith (Kathy) Adkins; and many nieces and nephews. He was preceded in death by his father, Jack Adkins; brother, Mike (Robyn) Adkins; and faithful feline companion, Murray. Family, friends, and others whose lives John touched are invited to attend either Memorial service held at Cornerstone Tabernacle, 781 Lincoln Ave, Holland, MI from 5:00 pm - 6:30 pm on Sunday, December 29th, 2019 or First Apostolic Church, 221 N. Eddy St. Sandwich, IL from 11:00 am – 1:00 pm on Saturday, January 4th, 2020, to celebrate his life.

The family of Johnny Lynn Adkins created this Life Tributes page to make it easy to share your memories.

Send flowers to the Adkins family.