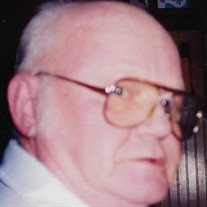 John William Wilson, 89, of Sandwich, IL passed away Sunday February 9, 2020 at Willow Crest Nursing Pavilion in Sandwich. He was born December 12, 1930 in Portageville, MO the son of Willie and Mary (Bozarth) Wilson. He married Melba Faye Evans on June 26, 1952 in Picket, AR. John was a proud member of the U.S. Army, serving during the Korean War. He was a long-standing Sargent at the Sheridan Correctional Center, known as “Papa Smurf” by his fellow co-workers. He loved playing his guitar. He enjoyed fishing and was an avid camper. Most of all he loved spending time with his family. He is survived by his son, Jeff (Judith) Wilson of Ottawa, IL; his two daughters, Kathy (John) Wagner of Sandwich, IL; and Joyce (Jack) Robinson of Earlville, IL; eleven grandchildren; twenty two great grandchildren; one great great granddaughter; one sister, Polly of Malden, MO; one brother, Don of Lawrenceville, GA; and several nieces and nephews. He was preceded in death by his parents, his wife, Melba; two sons, John and Art; four brothers, Perry, Harold, Lester, and David; and one sister, MaryAnn. Funeral Service will be held at 10:30 a.m. on Thursday, February 13, 2020 at Turner-Eighner Funeral Home in Somonauk, with Brad Entwistle officiating. Burial will follow at Oak Mound Cemetery in Somonauk, with prayers by Mel Inman. Visitation will be from 4:00 p.m. to 7:00 p.m. Wednesday, February 12, 2020 at Turner-Eighner Funeral Home in Somonauk. For more information or to sign our online guest book go to www.EighnerFuneralHomes.com Turner-Eighner Funeral Home 13160 Rt. 34 W P O Box 404 Somonauk, IL 60552

The family of John William Wilson created this Life Tributes page to make it easy to share your memories.

Send flowers to the Wilson family.