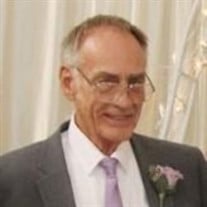 John F. Weimer, 82, of Sandwich, IL passed peacefully at his home on Wednesday, December 8th, 2021. He was born on November 1st, 1939 to Elsie Weimer in Burlington, Iowa, where he grew up exploring the creek and woods around their home. The family eventually moved to Illinois where as a young man John enjoyed the cars of his youth, being the proud owner of a red '60s Mustang and a '65 teal and white Chevy. He later spent years in the Navy touring the world and when he returned to Aurora he met his future wife, Joan. They married and spent the next 54 years facing the joys and struggles of life together. He used his creativity in many ventures through the years, including making molds and plaster casts for he and Joan's store, Creative Plaster, located in Aurora, IL. John later became a truck driver, which he greatly enjoyed until he retired. His retirement gave him opportunity to work on many home improvement projects as well as use his skills as an excellent chef to create delicious Sunday dinners for family get-togethers. John was a wonderful husband and father and he will be greatly missed. John is survived by his wife, Joan (Schnabel); his children Sharyl (Mike) Iwanski-Goist, Cathy Weimer, Steven (Raedy Ping) Weimer, as well as his grandchildren Amanda, Weston, Corey, and Jake; his brother, Paul Weimer; and sister, Marjorie Abraham. He was preceded in death by his parents; and one son-in-law, Vincent Iwanski. The Weimer family would like to thank Vitas Hospice and Fox Valley Older Adult Services for the help they provided which was much appreciated. John will be remembered with a celebration of life in the spring. Arrangements were entrusted to Burkhart-Eighner Funeral Home in Sandwich, IL. For more information or to sign the online quest book go to www.EighnerFuneralHomes.com Burkhart-Eighner Funeral Home 606 E. Arnold Rd Sandwich, IL 60548 815 786-2165

John F. Weimer, 82, of Sandwich, IL passed peacefully at his home on Wednesday, December 8th, 2021. He was born on November 1st, 1939 to Elsie Weimer in Burlington, Iowa, where he grew up exploring the creek and woods around their home.... View Obituary & Service Information

The family of John F. Weimer created this Life Tributes page to make it easy to share your memories.

Send flowers to the Weimer family.