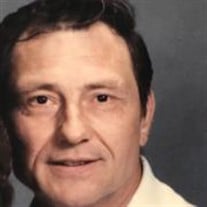 John William Shetina, 85, of Newark, IL, passed away Sunday, February 16, 2020 at Mercy Hospital in Aurora, IL. He was born November 15, 1934 in Rockdale, IL, the son of Edward and Jennie (Troha) Shetina. He married Ruth E. Mittendorf on April 25, 1964 in Batavia, IL. John was a proud member of the US Marine Corps, serving from 1954 to 1957 during the Korean War. He was employed by Garbe Iron Works in Aurora, IL for 30 years, until his retirement in 1999. John was an avid fisherman, but he could never catch as many bass as his wife, Ruth. Of course, he would never admit to that and always had a good “fish story.” He is survived by his two children, Debra (Brent) Cole of Oswego, IL and Victor “Eddie” Shetina of Newark, IL; one step-daughter, Cheryl Shipley of Newark, IL; two grandchildren, Brent Dylan Cole and Trevor John Cole both of Oswego, IL; two step-grandchildren, Mickie Kerry and Jamie Shipley; four step-great-grandchildren; one sister, Jean Marie (Robert) Pelligrini of Joliet, IL; one brother, Joe (Sue) Shetina of Joliet, IL; and several nieces and nephews. He is preceded in death by his parents; his wife; and two brothers. Services will be private. Cremation Rites were entrusted to Turner-Eighner Funeral Home. For more information or to sign the online guest book, go to www.EighnerFuneralHomes.com Turner-Eighner Funeral Home 3952 Turner Ave. Plano, IL 60545 630-552-3022

The family of John William Shetina created this Life Tributes page to make it easy to share your memories.

Send flowers to the Shetina family.