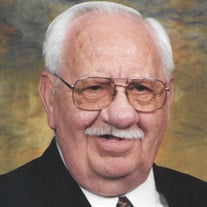 John William Kell, 95, of Sandwich, Illinois passed away on Monday, August 30, 2021 at Willow Crest Nursing Pavilion in Sandwich. He was born July 21,1926 in Sandwich the son of John W. Kell and Flora (Nelson) Kell. John graduated from Sandwich High School in 1944. He married Genevieve M. White on July 24,1948 in Sandwich. He was a Veteran of the United States Navy, serving during WWII. During his military career, he was stationed in Guam as a Navy Seabee. He was a member of the American Legion in Sandwich, IL for 78 years and was a lifetime member of the honor society of American veterans and service members known as The Forty and Eight. John was an active member of United Church of Sandwich and served on various boards over the years. He served as a manager for Little League baseball, was involved in Bitty Basketball, and served on the Boy Scouts of America Council in Sandwich. He spent many years running the scoreboard during Sandwich High School football games during and after the time his sons were in high school. He was a self-employed general contractor for Kell Construction for more than 40 years. John is survived by his children, Wayne Hanson of Sandwich; Daniel (Linda) Kelsey of Michigan; Gerald (Debra) Kell of Sandwich; Mary (Ron) Jones of Sandwich; and Richard (Ramona) Kell of Sandwich. Four grandchildren, Brooke (Corey) Morgan of Normal, IL; Christopher (Melissa) Kell of Sandwich; Ryan Kell of Normal, IL; and Steven (Erika) Mathis of Plainfield, IL. He is also survived by four great-grandchildren, William Morgan, David Kell, Catherine Kell, and Gabriella Mathis; special niece, Karen Beers and great-nephew, Jeff Beers; and several other nieces, nephews, and cousins. John was preceded in death by his parents; his wife Genevieve M. Kell; one son, John Steven Kell; one granddaughter, Sandra Elizabeth Mathis; two half-brothers, Alvin and Clarence Miller; and two half-sisters, Francis Toombs and Elsie Campbell. The family will hold a private burial service at a later date. Memorials may be directed to the United Church of Sandwich or the Fox Valley Community Services in Sandwich. For more information, or to sign the online guest book, please go to www.EighnerFuneralHomes.com Burkhart-Eighner Funeral Home 606 E. Arnold Rd Sandwich, IL (815) 786-2165

The family of John William Kell created this Life Tributes page to make it easy to share your memories.

John William Kell, 95, of Sandwich, Illinois passed away on Monday,...

Send flowers to the Kell family.