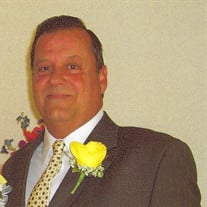 John L. Antich, 68, of, Montgomery IL, passed away Tuesday, September 15, 2020 at Rush-Copley Medical Center in Aurora. He was born April 19, 1952 in Joliet, IL, the son of Robert and Joanne (Friedrich-Benditz) Antich. He married Peggy Tyrrell Rhodes-Antich on March 28, 2009, after being together for 22 years. He was a proud veteran of the US Army, serving during the Vietnam war. He was a member of the Laborers Union #582, starting out as a laborer and later becoming an instructor for LiUNA Chicagoland Laborers Training Center of Carol Stream, IL. His favorite past time was antique cars, coin collecting, talking with friends, and he was never shy of voicing his opinions. He is survived by his wife, Peggy of Montgomery, his stepsons; James (Christine) Rhodes of San Diego, California, and Daniel (Rene) Rhodes of Poulsbo, Washington. His twin brother, Donald (Chereen) Antich, of Leland, IL, one sister, Jackie (Bruce) Douglas of St. Charles, IL, one sister-in-law, Mary Antich of Somonauk, IL, his half-brother, Brad Antich of Streator, IL, and one half-sister, Roberta Gregory of Channahon, IL. Several grandchildren and many nieces, nephews, cousins, and friends. He was preceded in death by his parents, one brother Robert Antich. Visitation will be Friday, September 18, 2020 from 4:00 p.m. to 7:00 p.m. at Burkhart-Eighner Funeral Home, in Sandwich, IL. Funeral Services will be 11:00 a.m. at the Funeral Home, with Pastor Shayne Stoddard officiating. Burial will follow at Pratts Oak Lawn Cemetery, Sandwich, IL. For more information or to sign the online guest book, go to www.EighnerFuneralHomes.com Burkhart-Eighner Funeral Home 606 E. Arnold Rd. Sandwich, IL 60548 815-786-2165

The family of John L. Antich created this Life Tributes page to make it easy to share your memories.

Send flowers to the Antich family.